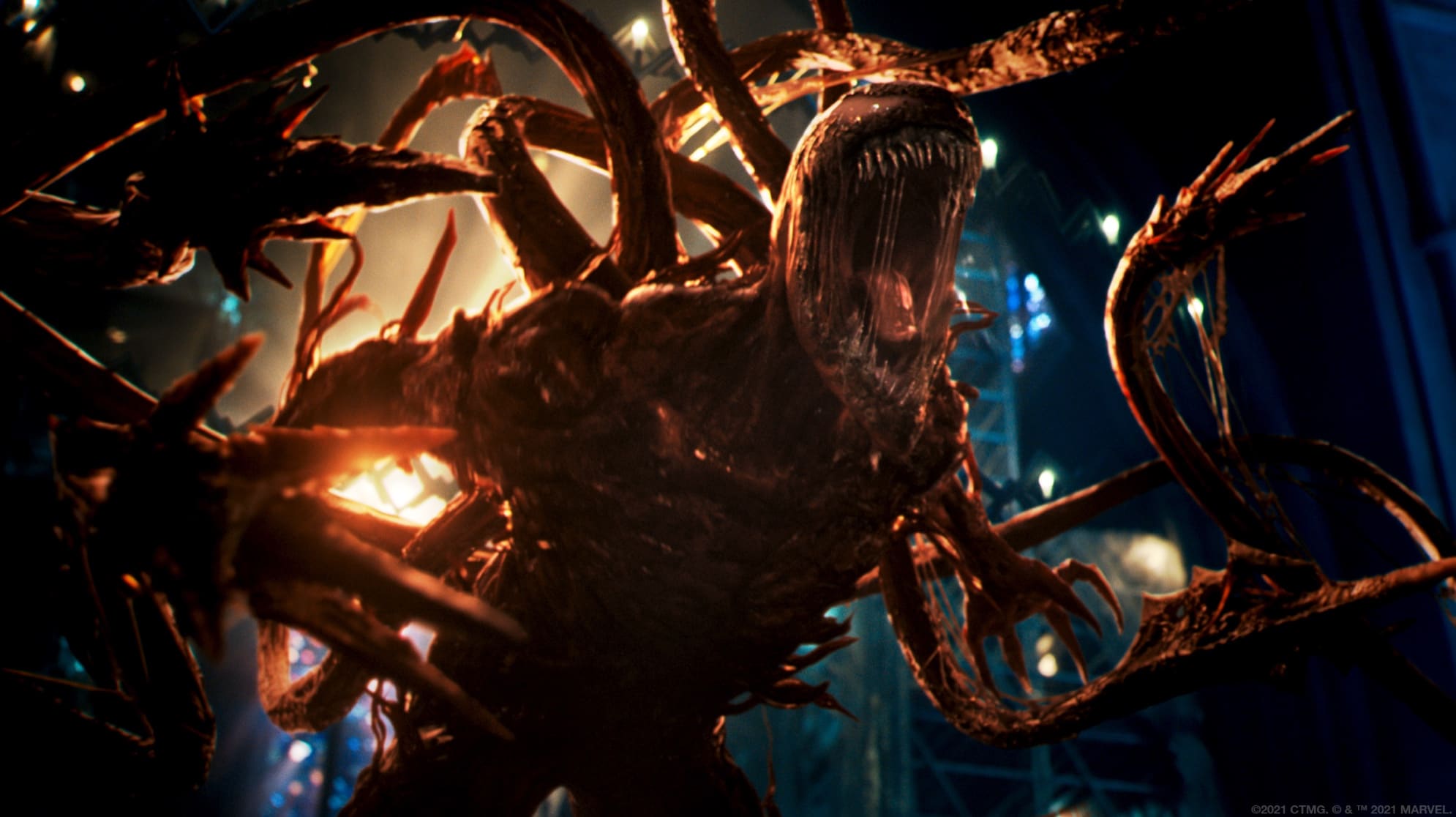 Sony’s addition to their little corner of the Marvel Universe, Venom: Let There Be Carnage, follows in the footsteps of 2018’s Venom, that’s for sure. Unfortunately, its just more of the same old same old… But slightly less annoying. Read on.

(Disclaimer: I’m not a comic book guy, I’ve never read a Venom comic, very few of any comics ever, so if I miss the mark, please let me know in the comments, thx.)

2018’s Venom came out to mediocre reviews, and myself, well, I’m one of those. I found it to be formulaic at best, rife with juvenile dialog, stupid sight gags, and forced juvenile humor and one-liners that were highly cringe-worthy… As many have said, like a super-hero movie refugee from the late 1990’s or something.

Venom: Let There Be Carnage is unfortunately more of the same. Although it tries harder, and is a bit better, it really just revisits old territory, and gives us a new snarling drooling stupid villain to deal with, and another that just felt like an unwanted 3rd wheel.

Don’t get me wrong, some of it is funny. I mean, not knee-slapping lose your breath from laughing funny, but more of the “sensible chuckle” type of thing.

…in the sequel, we find Eddie being summoned by serial killer Cletus Kasady (Woody Harrelson)… who through a simple act becomes “Carnage”… another evil Symbiote, this time a “child” of Venom. Or something. The reason being I guess ol Cletus just needs a buddy and thought enough of Eddie to pick him. Or something, whatever. I mean that was pretty lame as far as super villain motives go.

Oh, and there’s the back story with Cletus and his former “Girlfriend” Francis Barrison aka “Shriek” (Naomie Harris)… After becoming Carnage he goes to break her out and the two go on a proper Natural Born Killers crime spree, and yep, its up to Venom and Eddie to stop the two.

And that’s pretty much the movie. Lots of juvenile banter and physical/sight gags with Venom and Eddie. Lots of heads through ceilings, getting tossed around, going “ow stop it…” I mean, honestly it just kind of gets old. And we basically repeat the last movie, right down to Anne taking on Venom, and plenty of shenanigans involving poor Mrs. Chen (Peggy Lu.)

I was hoping maybe Sony finally picked up on what the MCU was really about. Oh, yeah I’ll get there in a second, but first, let me rant.

Disney’s MCU has one underlying theme throughout literally all of it. Be the best version of yourself you can be, and be who you are instead of who you’re “supposed to be.” All of it. Fight me if you disagree

Sony seems content to just play the typical action movie deck with its little corner of the MCU, and both Venom films fall in line with that.

But, there’s a little bit of hope with Eddie/Venom I think. I mean, maybe the movies are in fact about Eddie trying to become “better” with Venom, and we still have a character arc to finish here, I don’t know. To me it just seemed like Eddie spewing a lot of really crappy dialogue just traded back and forth with himself. I dunno, I mean, maybe, but….

Then there’s the character of Detective Mulligan (Stephen Graham). I figured he was just “the cop” in the movie, but it looks like he may still have a role to play in the future. No more spoilers.

I seem to be coming down hard on the movie, but if you’re going to be putting any Marvel property up against (or in, or alongside, or related to) the grand MCU, you’re gonna have to do better, Sony.

Oh, and I keep saying “Sony’s little corner of the MCU” because of the mid-credits scene in V:LTBC…. Yup, it looks like Eddie and Venom might get transported to Peter Parker’s little corner, and we all know what that means, right?

Are Disney and Sony moving closer to a “merger” of their Marvel licenses? It almost looks that way, doesn’t it. If what happens in Spiderman: No Way Home (unknown if Covid-related schedule mixups are to blame and spidey should have come out first?) is indeed what happens to Eddie, then we may or may not see Sony’s corner rolled in, or it might just end up a purely tangential set of stories, much like the Netflix Marvel shows did… Who knows, right? We won’t know for sure until December I guess. I also wonder how much control director Andy Serkis actually had, knowing Sony’s (long with other studios) penchant for the head office to meddle in the affairs of big releases….

Venom: Let There Be Carnage, only gets a paltry 3.2 / 5 from me. That credits scene gives me some hope that this will all start to come together soon, but formula super hero throwaways aren’t the way to do it. Build your own corner, sure, Sony, but know that you’re just not getting it done. The effects seemed slightly unpolished to me, and just overall wasn’t feeling the formula vibe. So much was just predictable or pointless (the entire Shriek business)… I would have rather seen Cletus have a much more personal reason for going after Eddie like he did, instead of “I just wanted a friend. Yeah, that’s probably a spoiler, but eh. That’s probably the only plot point that I didn’t see coming, and not for the better. If you need roughly two hours of basically mindless comic book tomfoolery then have at it.

Another fun trivia bit, I saw this and No Time to Die back to back on the same day, and thought it amusing that Naomie Harris played a major role in both. You go, girl.

Venom: Let There Be Carnage
3.2