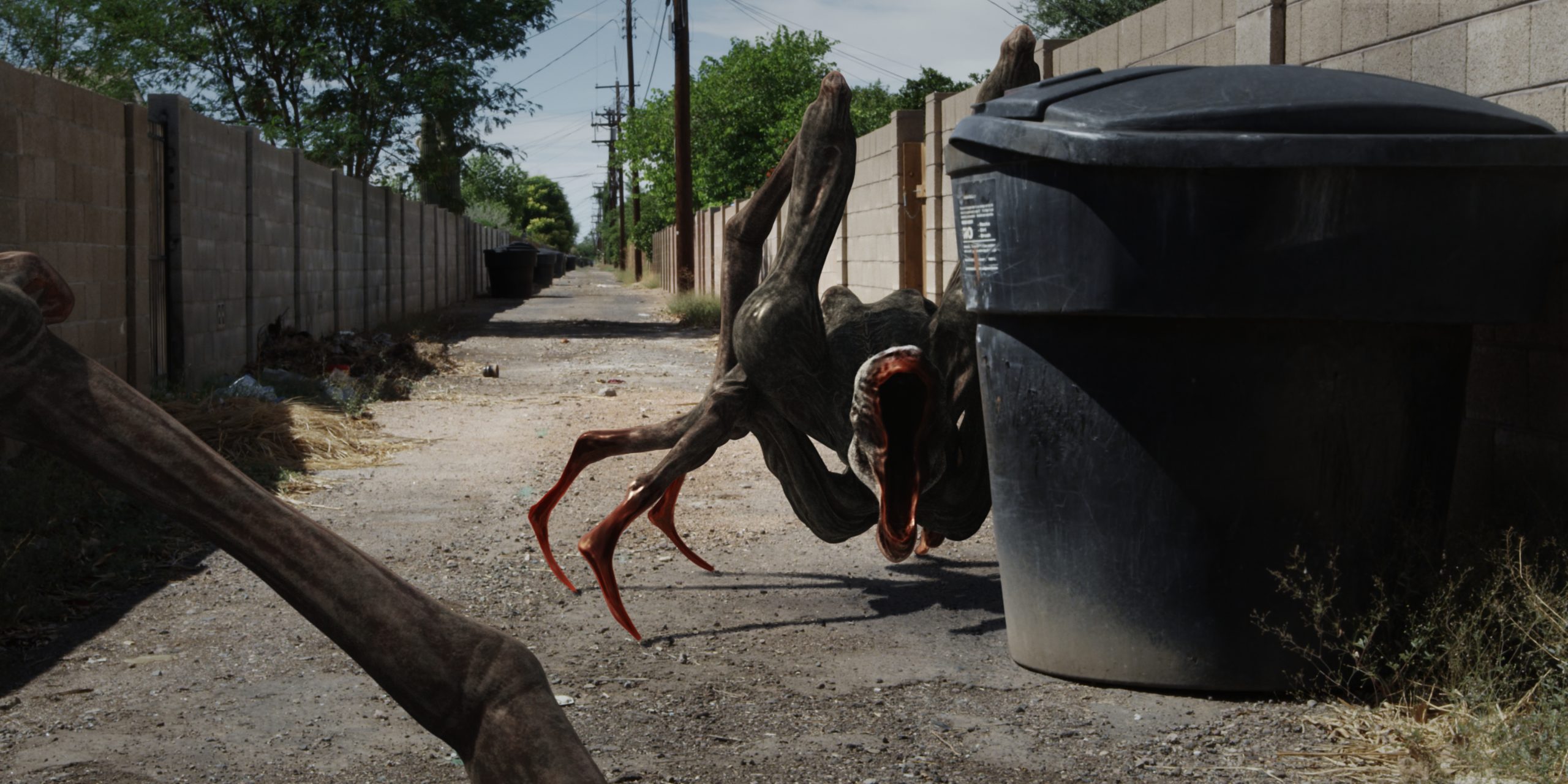 Oh, you got me, Intersect. You had me thinking I was watching a movie that was based on an actual H.P. Lovecraft story. But noooo, you guys just made it up to look that way and…

When I saw the Hulu writeup for Intersect,

A group of young Miskatonic University scientists invent a time machine, only to learn that they are being manipulated by mysterious, unseen forces from another dimension.

Hey this must be another Lovecraft adaptation, right? right? Naw, turns out that writer and director Gus Holwerda just took a lot of the best bits from ol’ Howard Philip (a name he throws in the film by the way…) and mashed it up into something new and unique.

I should probably try to run down the plot for you, since odds are you’ve skipped over this one.

There’s this group of gifted students working on a project at ol’ Misk U, that opens a rift in time and allows objects to travel into the future. Humans and other complex organic substances can’t make the trip. They come out the other side and immediately melt, or just turn into goo.

The team, formerly led by now-deceased professor Bill (James Morrison), now led by Ryan (Jason Spisak) along with Nate (Abe Ruthless) and Caitlin (Leann Dearing) are on the brink of something big. They’ve just announced this breakthrough to the public, and its attracted the attention of some religion nutjobs, who are protesting and eventually cause a pretty nasty event to occur (more on this later.)

But, Nate kind of loses his shit one day, and just decides “hey I’m just gonna go on thru and see what happens.” And he does it. And what comes out a few minutes later isn’t Nate, but rather about the same volume of blood. Ew, right? (Actually this whole thing reminded me of Stephen King’s story, “The Jaunt.”)

Truth be told if you look at it in just the right way, there’s kind of a King homage thing going on, also, with Young Ryan and his fight against the bully. Maybe. If you look at it right. King’s whole “finding your power” business, I guess.

As Ryan and Caitlin try to figure out what to do next, the religious wankers decide to blow the thing up. Good move, guys.

Now, throughout the movie we’re subjected to a series of flashbacks. Or so it would seem. As Intersect progresses, we start to realize that “Wait a minute, this stuff is like happening in reverse, isn’t it?”

And sure enough, young Ryan is paid a visit by a troubled Nate from the future, warning him not to build the machine. This causes an incident that until “now” (which as the movie progresses, becomes a tricky term…) Ryan had been blocking from his memory.

Young Ryan also starts to see strange objects and spider-like faceless monsters appear. Professor Bill happens to run into Young Ryan one day during one of their encounters, and Bill can see them too. He knows all about them, they’re “observers” and they’re trying to figure out what’s going on.

At the end we find ourselves at the “intersect” of these timelines in the past and the future, the elder gods are happy and while everything isn’t right with the world, its no longer slated for demolition.

Now, here’s where I take back a bit of that praise. If Intersect has a flaw… I mean it has a few, ok, that’s fair. But not gonna lie, the writing, acting, and yes even the direction (sorry, Gus) really seem to be sub par for lack of any better term. There are times when you hear a line, and all you can do is go, “uhhhh OK? that was awkward.” Similarly with some of the actor’s delivery (OMG I hope Young Nate never acts again.) Just moments that make you cringe because it was clumsy writing delivered clumsily…

The entire first half of the film starts to drag on, to be honest. There are times when you’re just sitting there going “well, is this going to actually go anywhere or what?” But once it does, and the pieces start falling into place, you can look back and go, “aha, I see what you did there….”

Then there is the entire plot line with the religious bully, who as luck would have it is actually a bully from the kids’ school days. This just didn’t feel right, it felt forced, like “hey we need a catalyst so we can blow the thing up… hey I got it!” and it got out of hand or something.

What you wind up with in the end, is a pretty well crafted Twilight Zone worthy time travel picture with a ton of Lovecraft lore and references and homage happening. But, the cut and polish just don’t quite make the grade, which is unfortunate.

Gotta go with a 3.0 / 5. I probably should go lower, but the mere attempt at such a feat, with all the Lovecraft fan service deserves a few points alone. I mean, when it was over, I was seriously searching for what HPL story this was based on, and found nothing.

Oh, and if you recognized the voice of the lab computer, that would be none other than Richard Dawkins. Yeah, I mean you have to go watch it now.