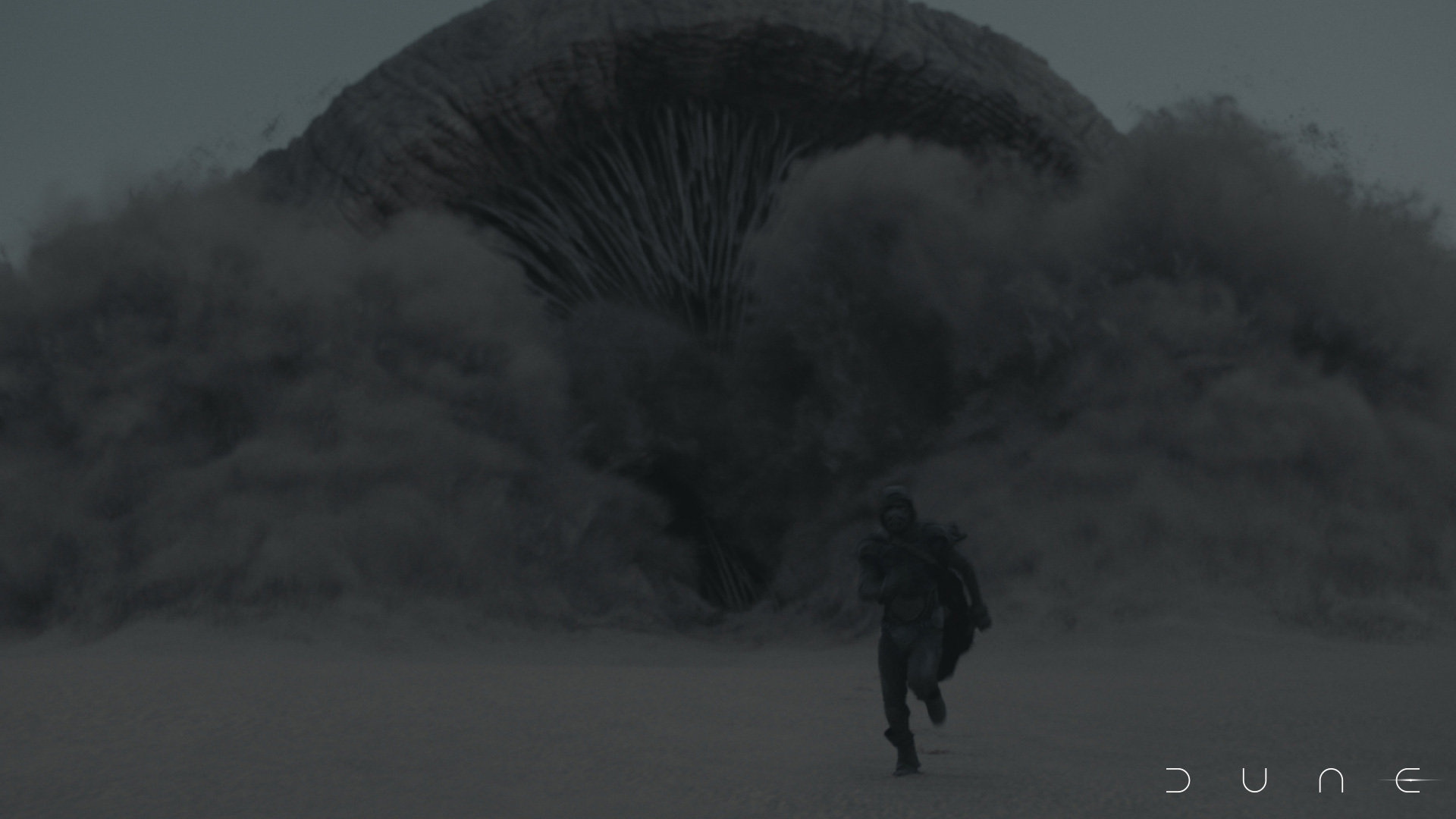 Like a good scifi nerd I ponied up the cash and went to the theater for Denis Villeneuve’s DUNE (Part 1)… not only that, but I ponied up even more for the D-Box “Rumble Seat” and I’ll review that at the end. Later that night I also watched the movie on HBO Max, with my Atmos System and 65″ 4K UHD screen.

The Big Screen vs. Small Screen

First of all, if you have the means and opportunity to go see DUNE on the big screen, DO IT.

Denis has managed to portray a sense of massive scale the likes of which I haven’t seen in a long, long time. Whether its stunning landscapes with drifting “spice” / sand, giant troop transports, or jump gates the size of moons… At least the screen I was at, the size of it all is just jaw-dropping.

On the small screen, well, its still there, but just, its not the same thing. I liken it to the first time we all saw that star destroyer chase the Tantive I in orbit over Tatooine… It’s kind of like that in person.

The audio was equally spectacular, both at the theatre, and on my home system. However, I couldn’t get my receiver to “switch over” to the Atmos profile like it does with Disney+ and Prime Video. Its not the first time I’ve had audio track difficulties with HBOMax, though, so YMMV. Instead I got the 5.1 mix, which was pretty good in its own right. This was on a Fire Stick 4K, if you know what the deal is, let me know.

DUNE, if you’ve read it, and I did a couple times if I remember in the late 1980’s. But not since. So I had to whip out David Lynch’s Dune (1984) to refresh my memory on the story, characters, etc.

There’s one thing for sure. Certain “scenes” from the book apparently absolutely positively are required to be in a DUNE Movie. The “shield fight”, the Gom Jabbar, Hunter/Seekers, the floating Baron, etc. etc. …

Since I have no recollection of minute plot points, his descriptions of things, etc, I can’t really speak to how “accurate” the film is versus Herbert’s book. I do know that Dr. Kyne’s has been gender swapped, and if that bugs you then whatever. Long as its not uber-critical to the story, who cares, man. Good scifi should be a mirror for the time it was made in, and even into the future, that’s just my opinion, though.

And for sure, Denis gives us all exactly what we’ve been longing for since, well since 1984 actually. A really decent looking, not dumb, not cheesy, not “Flash Gordon” style, thoughtful and not stupid adaptation of Frank Herbert’s scifi masterpiece.

That’s all really I had, was a basic Cliff’s Notes version of the story when I went in, and as the film went on, I began to remember more and more.

One thing I did notice, and I think will make this version of Dune infinitely more approachable and relatable to the muggles out there, is the way they’ve made the production actually feel like they’re in the middle of a ten-thousand year old empire. The “organic” and “lived in” nature of a lot of the scenes, the royal graveyard, the field where Paul watches the ships rise out of the lake… These are places that almost anyone can remember what it feels like. Yet, like in the last example, Denis reminds us that yes, we are still in the far reaches of outer space. The “Flash Gordon” look and feel of 1984 thankfully doesn’t rear its goofy head here.

Now I don’t know about Herbert’s politics and frankly I don’t care. Here, though, there are a few subtle and not-so-subtle themes going on that you might not immediately catch onto.

First, is the entire “Imperialist” vibe going on with the Atreides and the Empire in general, especially contrasted with the “natives” on Arrakis. The costumes, sets, etc. all remind us of Western European powers during the Imperialist ages….

…and the Middle Eastern-like dress, religion, etc. of the Fremen, are obviously meant to remind us of, well, I just said it, didn’t I. Even the cities on Arrakis bear a more than obvious resemblance to the pyramids of Egypt. If you didn’t pick up on this whole thing you’re not paying attention.

Similarly, there are some moments, especially when Paul is reviewing his data files, where we see the textbooks display a certain amount of false and prejudiced information. Nice touch there.

And, not that its a bad thing at all, it feels like we’re heading for a “girl power” moment at some point. I just feel it in my bones.

I also like what he’s done with the “internal dialogues” that are present in the book, and that Lynch failed to portray well. Either we are left to infer the characters mind from the context, reaction, etc…. or they just say something out loud, which honestly just works.

So the big problem I have with Denis’ Dune is that its just so goddamned serious. 99.6% of the movie is dark, dreary, dirty, and all that is amplified by an eternally ominous and weighty (yet forgettable) soundtrack from legend Hans Zimmer.

The few attempts at humor never really tip the scales out of that funk but provide a bit of a smirk, if you even catch it at all. Watch Gurney’s reaction when Duke Leto tries to spit onto the table but instead sprays almost everyone.

Two and half hours of just heavy, palpable, ominous dark that you can almost taste. I mean, maybe just lighten it up in a few places or something.

The color palette is a very muted sludge of yellows, browns, blues, greens, grays, and orange. In some places you’d swear it was monochromatic. It gives Dune a “signature” look, that’s for sure, but I would have liked to see a little more color and light!

I will say, though that the background music reminded me of the soundtracks to Blade Runner, and Villeneuve’s Blade Runner 2049 more than anything. It had that same “spooky weird ethereal” thing going on all the time, and at times Blade Runner just came into my head due to the music.

Much like Lynch’s version, this is no different in the casting department when it comes to a-listers. Oscar Issac as Duke Leto, Josh Brolin as Gurney Halleck, Jason Momoa as Duncan Idaho, Rebecca Ferguson as Lady Jessica, Javier Bardem as Stilgar, Stellan Skargard as Baron Harkonnen, Dave Bautista as Rabbat, and Zendaya as Chani.

Of course there is Timothee Chalamet as young Paul Atreides. I like this younger version versus Kyle MacLauglin’s older version a whole lot more. It just seems to fit the character more. He also plays the role, and maybe this is more to writing I don’t know, but plays Paul almost like a Luke Skywalker type of character. You’ll see what I mean.

If I have a big WTF about any of the cast, its Bautista as Rabbat. Now I know Rabbat is supposed to be a simple minded moron, but honestly I don’t know how I feel about it. He just seems to stand there slack jawed and give his few lines with as little emotion or feeling as possible. Maybe he’ll step it up in part 2, assuming it happens that is.

At this point WB/Legendary would be stupid to not immediately be opening their wallets and saying “how much do you think you’ll need, Denis?” It would be a crime against humanity to not allow this story to continue like this. Just do it.

They ended this at probably the most perfect time, just as Paul joins up with the Fremen. I don’t think we’re in spoiler territory here, as if you’re here, you’ve either seen it or know the story well.

Honestly, I wanted to like it a lot more than I did, just man its so serious and heavy and dark all the time. All. The. Time. I’ll go 4.2 / 5. I mean, yeah its great, actually, just would have liked to not come out of it feeling so depressed. And like I said, I was hoping for a less forgetful soundtrack, but what’s there is just mood music for the damned or something. I’m getting sad just writing about it.

Oh yeah, so the Cinemark near me has an auditorium equipped with their “D-Box” seats. What’s that you ask? Well its just a basic recliner seat, only the first thing you’ll notice is that it sits higher. The chair itself shakes and “rumbles” with the LFE’s in the audio. Additionally it can do some slight banking and pitching.

So was it worth it? Eh, not really. I mean if you want to do something like that, sure. I found it more distracting and actually annoying in spots than anything. But I go to movies to watch and listen, not get knocked around by my chair. The highest setting was a real roller coaster, and the lowest, while better, was still pretty physical.

I don’t think anything is especially encoded for it, but rather it seemed to move with the intensity of the various channels. For instance, there was a scene where an “ornithopter” was on the right side of the screen, but it was banking left. The chair interpreted that right-side audio as LEAN RIGHT. So I was leaning the opposite way of the craft on screen. Details, man.