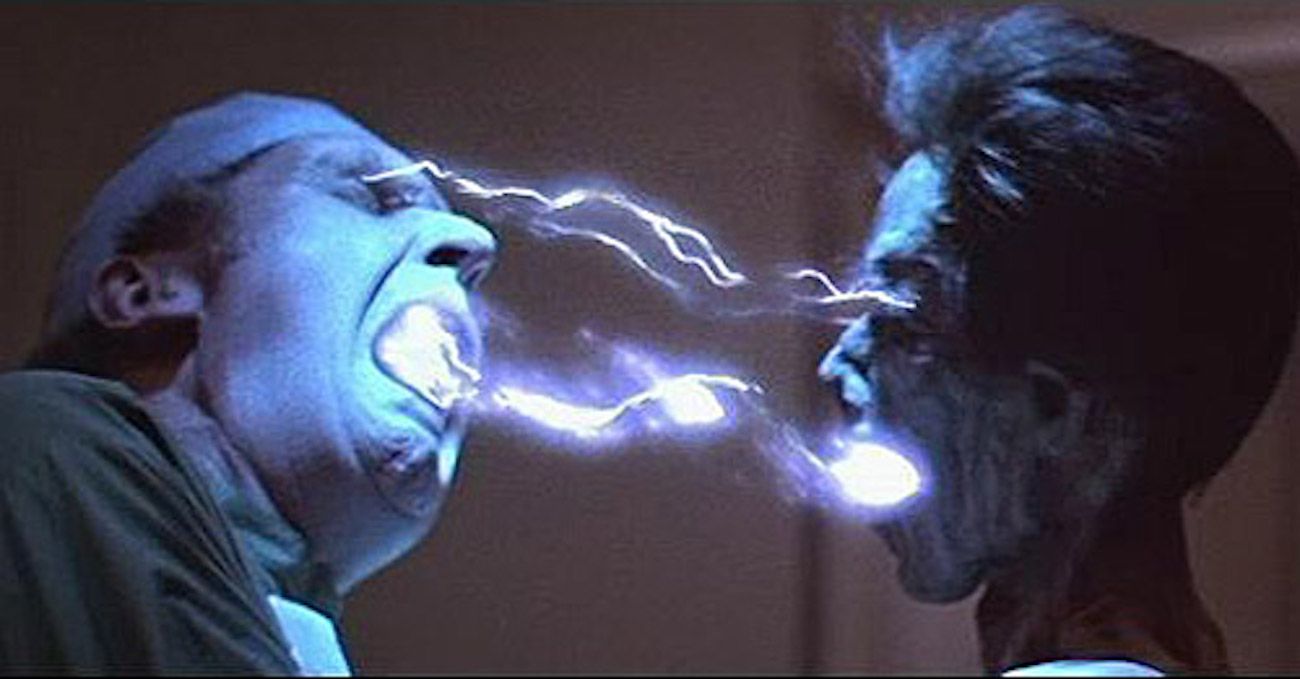 “Hey I just finished this book about Space Vampires maybe we should make a movie about it.”

I imagine the pitch meeting for Lifeforce went something like this. Only “hey, lets get acclaimed director Tobe Hooper, brilliant FX guy John Dykstra, and composer Henry Mancini on board!”

“Oh crap we’re out of money for writers or actors, what do we do?”

The crew, led by Col. Carlsen (Steve Railsback) discovers a 150-mile long spaceship inside the tail of the comet. They investigate and find 2 human males and 1 human female (Mathilda May) in some sort of suspended animation, along with a bunch of dead bat-looking creatures. Of course they’re just like, “slap a net around this shit and lets take it home.”

Well, the naked space chick (did I mention they were all sans-clothing?) wakes up and kills them all (wait for it), leaving a burnt out husk of a ship to return to Earth.

Of course NASA and ESA, despite the obvious mystery of “OK, so why is the ship burned up but these 3 untouched?” are like “yeah lets just bring the naked people down here what could go wrong, amirite?”

What could go wrong he said.

At this point, Lifeforce quickly devolves into some very odd amalgam of 1980’s horror, science fiction, and I don’t know what else. The girl wakes up, literally sucks the lifeforce (ha) out of a guy, then escapes into the wild. The two males basically do the same.

But wait, there’s more. We find that Col. Carlsen arrived on Earth in the shuttles one and only escape pod (how many crew members were there again?) … He partners up with Caine to solve the mystery and bring the girl back in.

Only we find that alien space chick has some sort of spell on Carlsen, and he’s under her spell, completely smitten and needs to get back to her for other reasons.

So, naked space chick escapes, takes over the body of another woman and escapes to an asylum (bc why not right) and proceeds to inhabit the body of Dr. Armstrong, played by a very pre-TNG Patrick Stewart I might add. They try to exorcise her from him (err ok I guess) and then when that fails, transport Armstrong via helicopter to some secret base.

Oh hey did I mention that the two dudes escaped and are now converting the entire population of London into space vampire zombie things now? Yeaaaaahhhhh, baby. Suddenly London’s under martial law and everybody’s lost their shit. Dogs and cats living together, the end of the world.

Well, not to be outdone, space chick proceeds to EXIT Dr. Armstrong’s body via basically all his blood, manifest herself in the helicopter they’re flying in, and then explode. ew.

Except she didn’t because she’s actually in the basement of some cathedral in the most impossibly gothic-looking vampire setting imaginable. All of the souls aka lifeforce of the people getting killed in London are being focused through her, and into the umbrella of the comet ship.

Dr Fallada has gone nuts and proved that they can be killed using an oddly specific metal compound weapon. Like “really did it need to be that specific?”

So Caine takes Fallada’s vampire killing sword, and goes off to find Carlsen who took off ahead of him. He uses it to take out the remaining vampire alien dude who promptly turns into one of those bat things and explodes. Bc that’s what dead alien space vampires do.

Carlsen and the naked space chick are now, well, you know, down there in the fantastic dungeon. He throws the sword, Carlsen kills vampire girl, the ship leaves Earth and that’s the end.

Did I leave anything out? Probably but I don’t care because it doesn’t matter.

This film is just so utterly bizarre to me. On the one hand you’ve got Hooper’s direction, which by and large isn’t bad. You’ve got Dykstra’s effects, which are also pretty damn good for the time, and then there’s Mancini’s absolutely amazing, if at times overdramatic score….

…but then you’ve got the horribly written awkward dialog, the terrible story, the mediocre acting, the pacing absolutely sucks… and by the end you’re just like “WHAT THE ACTUAL FUCK IS GOING ON.” It’s just so all-over-the-place that words can’t even describe it. Countless scenes of just British talking heads, followed by a pretty cool effects scene that is supposed to be scary but instead just comes across as corny today. An obvious ploy for the eyeballs of the young dudes out there with the naked girl just walking around, I mean for 1985 its surprising they were able to get away with that much full-frontal in a rated-R picture. Worth mentioning that there isn’t a single similar shot of the guys, which is pretty much spot on for the decade.

The acting in places is just so bloody god-awful. There’s a scene where a butler or whomever walks into the room and tries to “act surprised and scared” and you can almost hear Bob and Doug in the corner going, “psst, come on, act. Act, cmon you knob!”

Boil Lifeforce down to its core and you’ve got a fairly decent premise. A really good film could have been made out of this story. I don’t know how we wound up with this paradoxical nightmare but I hope it never happens again.

I just, I actually had to watch Lifeforce TWICE because I had to make sure I remembered it correctly. Turns out it actually was that scattered and bad, I just didn’t want to face it.

Also, I take no pleasure in crapping on a writing effort from (at least in part) Dan O’Bannon, who wrote for Alien, Aliens, and many more very excellent scifi movies.

Final verdict? 2.0 / 5. Look, the potential is there. The effects are there, the soundtrack is there, even the direction at times is pretty good, but man. Just, what happened, guys?