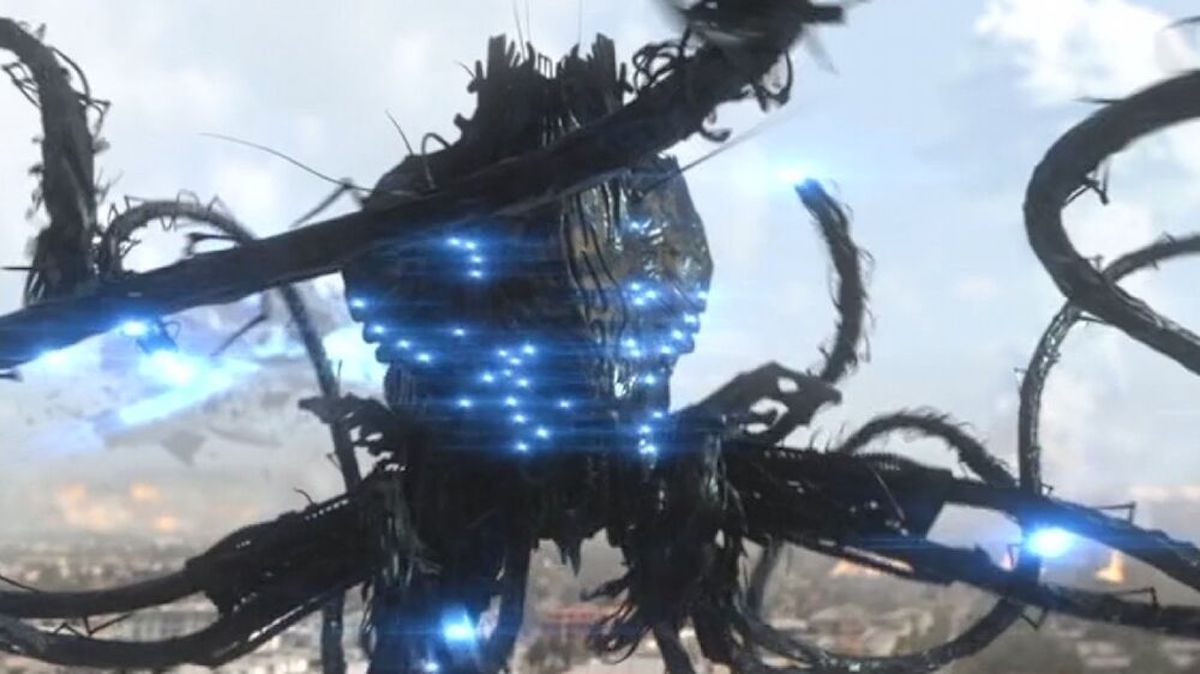 On Thursday, March 18 2021, Skylin3s (plural, with the 3) comes out on Netflix. I know its been out on disc since December, but I’m a bloody tightwad and I’m not buying discs any more unless its something “archive worthy” in 4K. I heard it was the last movie in the “Skyline trilogy” so I’m like “crap, I guess I should go watch the first two, right?”

And it turns out, I’ve seen this movie before, but so long ago that I didn’t really remember it. You know, one of those things where you’re like “waaaaaitttt, I sort of kind of remember this, but I don’t….” Yeah, like that.

Anyway, the first of this trilogy, Skyline is a tight, focused little film that came out in 2010, not long after Cloverfield hit the scene. I suspect this was an attempt to latch on to some of that mojo, because it kind of reminds me of that.

About 4:30 in the morning, though, weird shit starts happening. These glowing blue orbs come down from the sky, and anyone who looks at it, like poor Ray, gets sucked into it. Jarrod nearly gets pulled in, his face turning all messed up with black veins and black eyeballs and the usual alien effects.

Not long after, the mother ships show up. Tons of Matrix Sentinel looking drones start combing the buildings for survivors, and our gang is nearly hit. Actually this is now the core premise of Skyline. This group of people trying to escape the alien invasion and get to a nearby marina, hop on a boat, and just zoom on out. Great plan, right?

Well, the aliens have brought all sorts of nifty toys with them. In addition to those drones, there are big bipedal “tanks”, even bigger ships, and yeah even bigger tanks.

They get to the parking garage, and almost get out, but Terry, Denise and that gorgeous Ferrari get squashed by a giant alien foot. Another screamey-run-away scene unfolds, and its revealed that these things are pulling human brains and spinal cords right out of people to use as fuel or an interface or something for these vehicles. Every time they get one down, it just grabs another brain and keeps on ticking.

Back in the apartment, now with building manager Oliver (David Zayas) they witness a bunch of Air Force drones engage the big ship, and hit it with a nuke. It goes down, but only temporarily.

There’s more running, and more screaming, and then some more hiding… Yeah I’m sensing a pattern here, you know?

Jarrod and Elaine manage to get to the roof to try and get picked up by some helicopters. Oliver blows himself and one of the big ones up in a gas explosion. Predictably, an even bigger tank takes down the helicopters and wreaks more havoc.

[Cue Sad Music] Jarrod and Elaine wind up getting sucked up into the ship. Oh, almost forgot, Elaine’s pregnant, so she gets special treatment. But poor Jarrod, he gets his brain sucked out, and.. wait a minute. Why is his brain orange when everyone else’s is blue? Apparently his repeated exposure to “the light” has made him stronger and resistant to the aliens using his brain, so now his brain is running one of the alien bodies…

… and that’s basically it.

Look, Skyline is your average alien invasion slash monster movie in a nutshell. That much is clear. But truthfully, this isn’t an entirely terrible movie. I’m not one for monster movies, but there wasn’t endless convenient plot twists, very few pointless moments, its got excellent focus (as opposed to the next entry) never straying from our core group and their building, until the very end.

These aren’t some no-name actors here, either. You’ll recognize Balfour, Thompson, and Zayas straight away if you’ve watched any TV at all since this came out. From Haven, NCIS, and Dexter respectively. If anything they’re doing the best with the so-so writing they’ve been given.

But the real star of Skyline is the special effects. For a “low budget” movie, these effects just aren’t bad at all. The whole “brain” thing sure comes as a shock the first time you see it, too, because you’re not expecting it to be something like that. You’re like “whoa! what?”

My verdict on Skyline: 2.5 / 5 It’s not the worst scifi monster movie action flick I’ve ever seen.