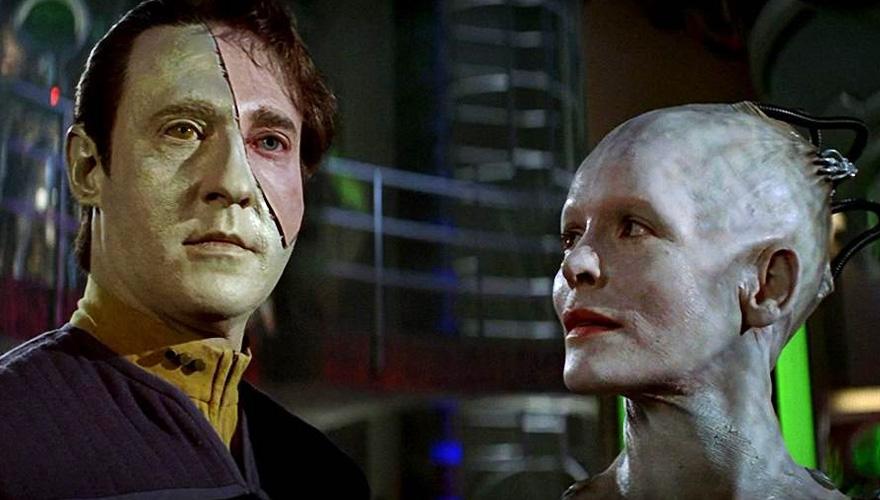 Star Trek: First Contact is the first 100% “Next Generation” movie to come out of the Star Trek universe. Yeah, sure, there was 1994’s “Generations” which was probably 70% TNG, and managed to tie the TNG era to the TOS era in a pretty nice little package. I like it anyway.

This movie is lauded as the “Best” of the TNG movies. And apart from Generations, it basically is. The ho-hum two-part TV episode faliure “Insurrections” and then “Nemesis” came after, but “First Contact” is the best.

Problem is, when you watch it today… its just not that good. It hasn’t aged well at all, to say the least.

Quick plot rundown, and then I’ll explain why.

The Borg sent a cube to attack Earth. Picard and his shiny new Enterprise “E” get told NOT to come help because of Picard’s previous conversion into Locutus of Borg, and honestly who knows what would happen. Well, he pulls a Kirk and jumps into the fight anyway. They destroy the cube with his insider knowledge, but not before a Borg “time ship” ball-thingy goes shooting out of it and straight to Earth, with the enterprise in tow.

Wouldn’t you know it, they arrive on Earth mere days before Dr. Zefram Cochrane goes on the maiden voyage in the Phoenix, Earth’s first warp-capable ship. The Vulcans just happen to be nearby and he absolutely MUST fly the mission so they notice, and start Earth down the path of Star Trek glory. That and there’d be a blank space in the ST: Enterprise into if he didn’t…

Problem is, the Borg came here specifically to stop it. Strangely enough instead of heading to the surface and simply vaporizing everyone and just going home, they invade the Enterprise, along with the “Borg Queen”… who is essentially the “master brain” of the Borg collective. She takes a shine to Data, and has a series of really painfully bad scenes where she gives him actual skin (yeah I’ll get to that, trust me.)

The crew of the Enterprise get rid of the Borg Queen, help Cochrane fly his mission, and then just conveniently reverse-engineer the Borg time travel and return home. Fin.

OK, lets start with this whole Data and the Queen business. OMG these scenes are really really bad. I know I probably have the minority opinion here, but they are. The set here is like something out of a 1950’s monster movie, complete with a silly plasma ball behind Data’s head, as he’s strapped onto the table like Bond in Goldfinger, whimpering because she’s turned on his emotion chip. Then there’s the really awkward dialog that is just, well, awkward. “Was it good for you?” Sheesh. I’m not particularly a fan of Brent Spiner in general, but man, just, could you have said to director Jonathan Frakes “can we re-write this part please?”

The entire concept of the “Borg Queen” always bothered me. I mean I get it, you’re trying to flesh out the whole “hive” analogy to its fullest. The idea that the Borg had no “leader” or central command structure was always a little frightening, wasn’t it? By introducing this “head of the snake” that we can simply cut off and kill the entire body… It neuters the Borg in my opinion. They go from being a giant nameless horde to something else entirely. I was never comfortable with this decision. But that’s just me….

Let’s move on to the topic of stupid one-liners then, shall we? Star Trek: First Contact is full of them. From the aforementioned “Good for you?” bit, to Picard’s “The reports of my assimilation are greatly exaggerated….” an “assimilate this” and a few others I’m blocking from my psyche at the moment. I get that it was 1996 and this sort of thing was all the rage, or at least the tail end of it, but OMG these are terrible.

Then there’s “You’re all astronauts on some sort of Star Trek.”

Then there’s the holodeck scene with Picard and Lily. At the risk of sounding absolutely insane, WHAT WAS THE POINT OF THIS SCENE EXACTLY. It makes no sense. “Hey I know, I’ll go into the holodeck and confuse the Borg with a 1940’s detective story!” What? I guess it gives an excuse for Picard to go all Rambo and use a Tommy Gun to illustrate him going off the deep end a bit. I guess.

The comical hijinks on the surface with Cochrane, LaForge, Riker, and Troi are OK, I guess, in a mid-1990’s sort of way. But now they’re just cheesy and goofy. Again, there was room for some “should you know your own future” moments but it all just ends with Steppenwolf playing on the stereo as they make the first warp jump.

And what about the scene with the deflector dish? “Hey, captain, don’t we actually need this thing that we’re trying to eject from the ship and destroy?” Well, yeah, you do… but whatever we need a complicated manual unlock scene (3 times no less) to fill in some space.

Look, is “First Contact” better than “Insurrection?” Hell yes, it is. Insurrection is naught more than a mid-3rd-season two-part episode that never should have made the big screen. Nemesis? Well, to be honest I haven’t seen it recently enough to comment, and its not stuck in my head like Insurrection is.

Keep in mind that this came only three(?) short years after the final episode of TNG. So there was a formula they were trying to stick to, I get it. But unlike Generations that managed to at least make things somewhat cinematic in scope, First Contact still feels to me like a season-ending/premiere cliff hanger two-parter. And not a proper movie.

And WHAT is with the completely terrible opening and credits sequences. They look like they were done on an Amiga in some guys basement. Just, so sub standard.

I don’t watch these films very often. I actually don’t remember the last time I actually sat down and watched Star Trek: First Contact front to back. I thought I remembered it being better. I’m sure I did, but I guess tastes change, the bar gets raised, and we tend to look back nostalgically and think how great things used to be.

When they really weren’t that great at all.

Star Trek: First Contact, I hate to do this, but you’re getting a 3.4 / 5. Yeah, yeah, sue me. I thought I remembered it being better, I really did. I mean, it is Star Trek, and doesn’t pretend to be anything more than a continuation of Star Trek: The Next Generation. So I guess that’s worth something.

Oh, and I have to wonder…. It’s crystal clear in a few places that Lily and Zefram are supposed to be “together” if you know what I mean. But its never really spelled out, and I have to wonder why. Did Braga and Moore or even Frakes think that Star Trek audiences weren’t “ready” for a black/white relationship or something? It’s like it was hinted at but we’re left to whisper about it in the corners “did you see that omg I can’t believe it….” Maybe the studio had a hand in it, I have no clue. Wouldn’t surprise me. Roddenberry would have just done it. Change my mind.

Oh, (part 2), and you’d think that the sudden development of being able to time travel on a whim would have been more important. “Wait you discovered what now?”

True story trivia time: I never actually saw this movie in a theater. I got married the week before it released, and was on my honeymoon, then it was Thanksgiving, then Christmas, and then CRAP its gone from theaters….