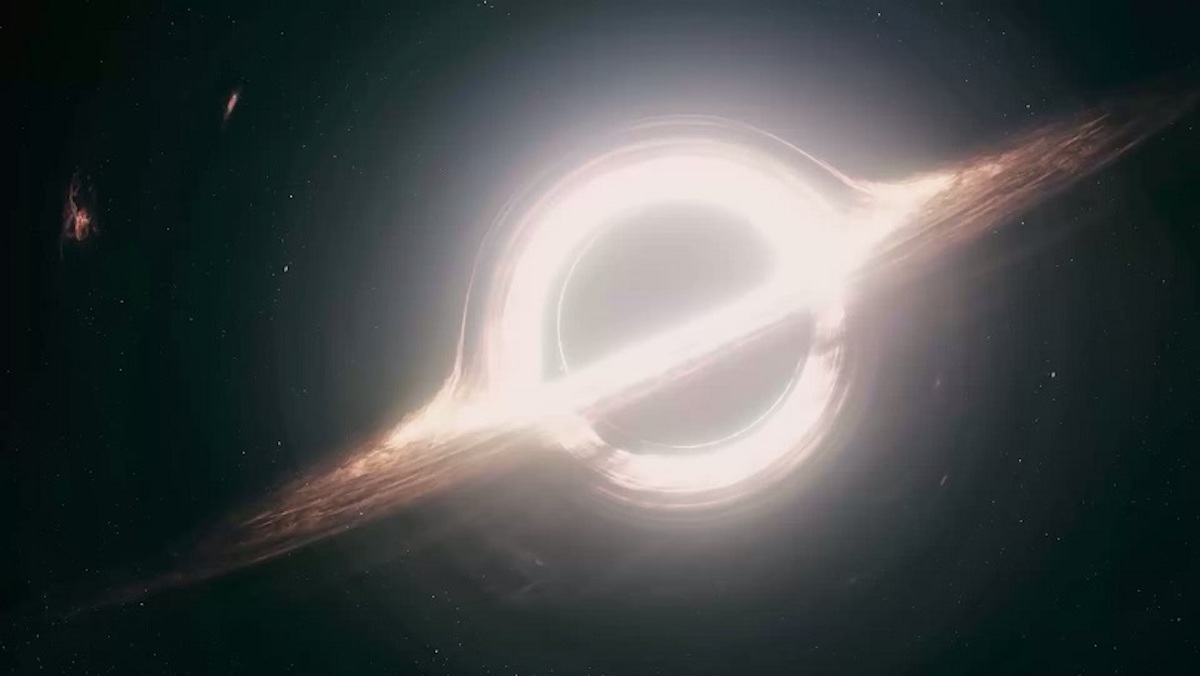 I remember seeing Interstellar not long after its release, and I remember coming away a bit disappointed that I wasn’t completely blown away by the scope and scale of the movie.

So, I just picked up a copy of Interstellar on 4K UHD Blu Ray and figured it was time for a second take.

I’m still not completely enamored by it. Some people treat it like its on the level of, say, 2001: A Space Odyssey, and the like, and it definitely tries to be… but it just doesn’t quite get there.

I’m going to warn you right now, I’m not going to go into too much detail, because my spoiling the plot would defeat the entire purpose of the film. If you already know how it ends, your perspective on the entire picture is markedly different, at least I know it is for me. So, NO SPOILERS in this review. At least none that matter.

In the not too distant future, Earth is literally plagued with a wheat blight, causing mass famine and death. This is followed by more blights, massive dust storms, and outbreaks of disease, the inevitable wars that arise during crisis, and generally putting life as we know it in grave danger.

Former NASA Pilot Joseph Cooper (Matthew McConaughey) now runs a farm with his son, Tom (Timothée Chalamet / Casey Affleck) and daughter “Murph” (Mackenzie Foy / Jessica Chastain), and his father in-law, Donald (John Lithgow). After a particularly bad dust storm, Murph sees a pattern emerge in how the dust fell on the floor of her room. Cooper sees it, too, and they decode it into a set of coordinates.

They hop in the old pickup, and find themselves at a secret NASA base. “Secret” because popular opinion has essentially eliminated the agency, as food is more important than space exploration at this point in human history. He meets an old professor of his, Dr. Brand (Michael Caine) and his daughter, the also Dr. Brand (Anne Hathaway).

The big mysterty begins, as to how or who or what brought Cooper, and Murph, to the base, but it seems to be serendipity as he is just the person they are looking for, at just the right time. They’re getting ready to launch the Endurance mission.

What’s that you ask? I’m glad you did. Seems several years prior, like decades, a large wormhole was detected near Saturn. This was kept from the public for obvious reasons. Several missions were sent into the wormhole to find a suitable planet for humans to effectively move to. These Lazarus missions produced a few possible results, and the Endurance mission is to explore the most probable candidates.

This means, though, that Coop must leave his family for the mission, with no idea if or when he will ever return. This, of courses, creates some necessary family drama. Tom agrees to take on the responsibilities of the farm, while the younger Murph can’t forgive him for leaving with no clear point of return.

They head off to space, going into cryo-stasis for most of the two years it takes to reach the wormhole. In that time there are various communications sent from Earth, giving cause for some emotional moments before they dive into the wormhole and across the universe to another galaxy.

The first planet they come across, is so near to a black hole, that they have to come up with a way to minimize the gravitational time dilation. Brand, Cooper, and redshirt Doyle head down to the planet, while Romilly stays on board for the predicted seven year (I think) duration.

Down on the planet they find the beacon on the surface, where everything is covered in about two feet of water. What they also discover is that the entire surface is covered in waves hundreds of feet tall. As they rush to get back on board the ship, they lose the data, and Doyle to the water. Returning to orbit, they discover that its actually been 23 years, and Romilly is still up there waiting for them.

But in the meantime, 23 years of communications have been pouring in, giving us cause for more emotional moments involving Murph, Tom, Cooper and Brand.

They hatch a plan to visit the next planet, where they find Mann asleep in stasis at his camp, alongside a destroyed robot….

And that’s about as much of that plot I want to reveal.

Meanwhile, back on Earth, in that 25 or so years since they left, Tom has had a family on the farm, and things are really starting to get rough for him. He’s already lost one child, the crops aren’t faring well, and the family is sick to the point they’re in danger.

Murph has been working with the elder Dr. Brand to figure out the gravity problem. Brand’s equation for Life, The Universe and Everything still hasn’t been solved. Murph figures it out, and discovers the secret that Brand has been hiding all these years…

And again, that’s about where I want to stop.

I’ll say that Cooper and his robot companion TARS end up going head-first into the black hole, and what they find in there is the stuff I don’t want to spoil for you.

So, you’re thinking, “well shit, Chris, what kind of a review is that?” I know, I know, but like I said, trust me. You’re going to want to be hit with the truth like I was. That “ZOMG WHY DIDNT I SEE THAT COMING” moment. Trust me.

So lets get into the other aspects of the movie. particularly the whole “relativity” shtick that made Interstellar famous. Disclaimer time: I actually have a BS in Engineering Physics, so yeah, I’ve “done the math” regarding relativity and all the scientific stuff they throw out in the movie.

For the most part, they get it right. Right enough, anyway. But there’s one thing that really chaps my ass both times I watched this. The signal coming from the beacon on the first planet. If the gravitational well is so strong as to cause a 23 year to a few hours time dilation… Hey, Einstein, your little radio signal isn’t going anywhere. That is gonna get redshifted so hard. They even kind of touch on it. “Oh yeah, its only been transmitting here for a few hours” REALLY? Well then how the shit did that signal get all the way back through the wormhole, and make the hour long trip to Earth from said wormhole in the first place? Even if by some miracle it did get off the planet, its going to be so frequency shifted due to the dilation / red-shift that nobody will even be looking for it! Ugh, I know, I know, its a relatively(ha) minor thing. But its glaring to me.

The “if we fly into the black hole fast enough it’ll be OK” thing was just like “well that’s pretty convenient, isn’t it?” Seriously, you’d be torn apart and crushed into little tiny bits and then into atoms or worse. But yep, “Interstellar is so scientifically accurate…” Yeah, it tries to be, it does. It’s basically pulling a Neil Degrasse-Tyson here, and explaining this in the basest of terms so everyone can pretend they understand it.

Oh, and also, where the hell did Romilly get 23 YEARS worth of rations on that ship? I think the story was he alternated stints in cryo as to conserve supplies, but still, that’s only going to last so long, right? There are a few other moments that would lead me to spoil the ending, too, just makes you squirmily go “ehh well ok I guess maybe…”

And lets try and talk about the ending without spoiling it. They do an interesting job of trying to show what life in a dimension above our existence might look like. Forget that it would be totally incomprehensible to our three-dimensional minds, let alone that our matter, such as we know it, likely couldn’t even exist… But it makes for good scifi, doesn’t it?

And the ending. It makes some of the “documentary” scenes from the start of the picture make sense. It also brings some excellent closure, but it also leaves so much hanging wide open, like Nolan wanted to make a sequel, an Interstellar II, and is telling us “hey maybe I’ll do more here….”

Speaking of director Christopher Nolan, his “why so serious” style of filmmaking is definitely evident here. There are some light-hearted moments, but the majority of Interstellar is spent either in peril, in emotional trauma, or in wonder at the universe.

There are scenes, too, that I wonder why he even bothered to include them. The “Drone chase” bit near the beginning, is one of those. It ultimately does nothing but give Cooper a little background, that could have been done in a tighter, probably off-hand way.

The 4K UHD Blu ray looks fantastic. I really don’t have decades of comparisons and formats to judge how good a presentation it is. It looked great on my screen, and a touch of grain was visible. I think the color palette was muted, at least it didn’t have the vibrancy of 2001 for example. The DTS-HD soundtrack, though, is truly impressive. It gave me cause to consider re-tuning my subwoofer, there’s so much LFE that everything around it was rattling and causing a lot of distraction.

If you’re paying attention, there are several tips-of-the-hat to Stanley Kubrick’s 2001: A Space Odyssey here. The big three that I spotted right off the top of my head: The organ music in some of the space shots is nearly identical to parts of 2001. The robots bear more than a striking resemblance to the monoliths, and they also seem to be a sort of “evolution” of HAL’s self-aware intelligence. Well that and their 4-letter naming scheme. Four, four ways it’s like 2001. Weren’t expecting that, were you? Oh and during Cooper’s black hole entrance there are a few moments that remind me of Dave’s trip into the monolith oh crap five. Five ways Interstellar is like 2001. I’ll come in again.

So my final verdict is what exactly? 4.3 / 5. Interstellar is definitely a spectacle for the eyes and ears. It’s a bit full of itself at times, as is expected from a Nolan movie. It’s mostly scientifically sound, up until it just isn’t.

Interstellar also gets a bit too “woo woo” for my tastes, delving into philosophical discussions about “is love a measurable thing that transcends dimensions” and moral dilemmas like “choose between seeing your children again, or saving the entire human race from extinction.” So it asks and tries to answer the hard scifi questions…. 4.3. And the ending, oof, just, just watch Interstellar. Then you’ll understand.