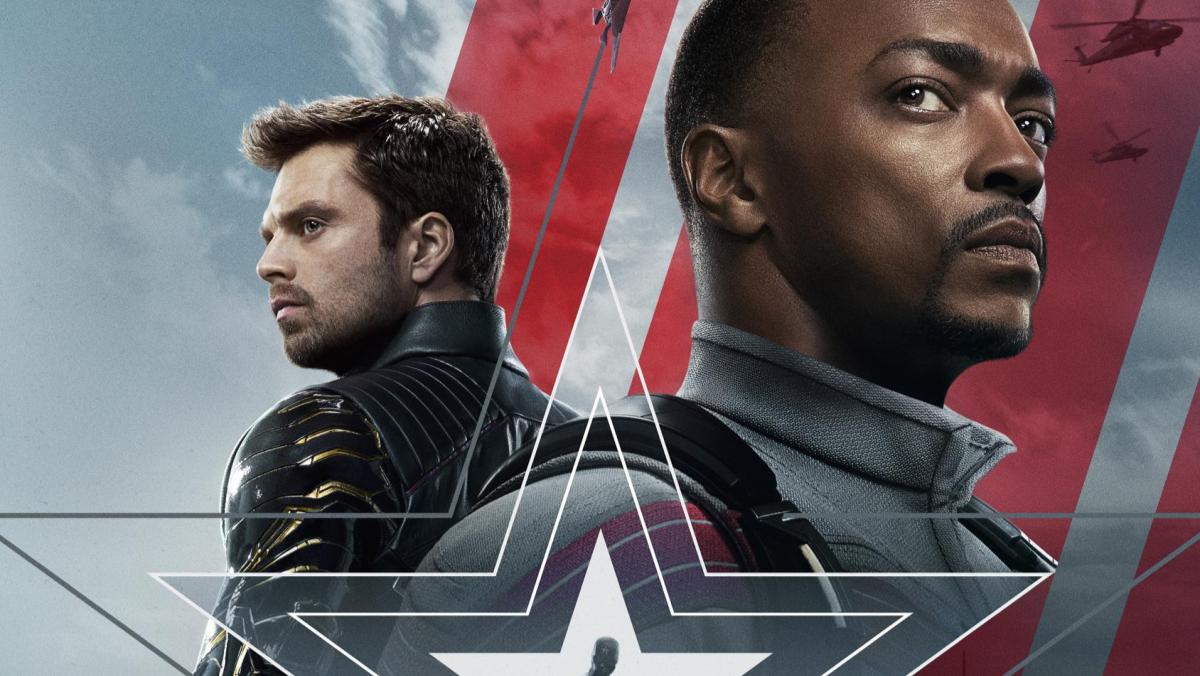 OK, so yeah, first off, I know, I know. The Falcon and the Winter Soldier is walking a fine line between what qualifies as “science fiction” and what doesn’t. I mean, its got super powers, super powered technology, a lot of super everything to be honest. But at its core its still just a dude in a suit, and another dude with a metal arm who got an upgrade…

…but I think given that this is still part of the Marvel Cinematic Universe, aka “MCU” it’s going to get a post from me.

I just need to get this over with right now, though. The Falcon and the Winter Soldier failed me in one aspect, that the recent Shang-Chi trailer failed me in also….

….making this fit into the MCU. Where we pretty much had a really good idea how WandaVision fit in, I don’t think there is a clear “place” in the MCU for this six hours of television. OK, sure it finished the upgrade of Sam Wilson’s Falcon (Anthony Mackie) into Sam Wilson’s Captain America, per the final wishes of Steve Rogers…. OK, yeah. And we brought back Zemo (Daniel Bruhl) and Sharon Carter (Emily VanCamp), OK… Cameo from Rhodes, check. A visit from Wakanda’s Dora Milagre elite special forces, check.

But to be honest, I was expecting Nick Fury to show up at the end of this, with a big “welcome back, Sam!” type of thing. At the very least, that would have been appropriate. Maybe Scott Lang with a cameo, seeing as there’s a history there, too…. I dunno, really. Maybe we are setting up a new wing of the MCU that (and hear me out) the Netflix guys can come back into the fold with. A “criminal underground” side universe where Cap teams up with The Punisher and Daredevil to fight The Hand and Wilson Fisk…. sigh, we can dream, can’t we?

Where was I? Oh, yeah, so here in this series, we have Sam and Bucky (Sebastian Stan) buddying up against The Flag Smashers led by Karli Morgenthau (Solo’s Erin Kellyman) trying to make a world where those who weren’t caught up in the snap weren’t displaced by all those people returning. I’ll give you this, that was a pretty ingenious plot angle that really makes you think. What would happen to the world if something like this happened. Half the population disappears for five years, people finally start making new lives and figuring things out, and then SURPRISE WE’RE BACK. I imagine it would be a total cluster, which is definitely evident in this story. We’ll get back to these guys in a bit.

Then you’ve got the military standing up special forces soldier and basically ordinary dude John Walker (Wyatt Russell) as the “new” Captain America. Now, think back the Captain America: The First Avenger. Remember him singing and dancing in the USO shows, doing bond drives, etc.? Yup, they want a new mascot. Unfortunately, they want to give him actual operating abilities, also. Which you can imagine leads to conflict between Walker and Sam/Bucky.

On top of this, you’ve also got an incredibly relevant sub-plot involving Sam and Isiah Bradley (Carl Lumbly) where Isiah was part of a forgotten group of black soldiers that were used as guinea pigs for the super soldier serum back in the day. Cry all you want about being woke-this and SJW-that. This was expertly written and borne out, giving Sam a “higher purpose” in taking on the helm of Captain America. It’s not just for him, not just for Steve, not even for your average American, but for these guys.

Oh, and of course you’ve got Walker, falling victim to lust for power, taking the super soldier serum himself, and becoming, well, I’m gonna say it. He’s a metaphor for the US and especially the US military at this point. Overpowered, thinks they know it all, willing to do whatever in his own interests, whether its the right thing to do or not, and basically not giving a shit who gets hurt in order to exact revenge. Did I leave anything out? Now he’s joined up as a merc, with his new “US Agent” code name for this Valentina Allegra de Fontaine (Julia Lous-Dreyfuss) in what I’m guessing is setting us up for more connections…

Don’t mis-read that as a slam on the average US soldier, either. I think Walker was just as much a victim here as anyone, being thrust into that role, I think he’s also just a metaphor for our troops as well. The onus is on the image of “America” as the world’s policeman, and global nosy neighbor…

Walker was the anti-hero we didn’t want, and we were supposed to hate him. Russell plays this role perfectly, if you ask me. He knows what he’s doing is wrong, but he justifies his actions as a means to an end. A concept that’s brought up a few times throughout the series.

As is done with the Flag Smashers, their methods aren’t necessarily the best to achieve their goals. We really can empathize with them, and their cause, but the radicalization that goes on here…. again dare I say it, we can see today in certain segments of our population who feels they’re being wronged and marginalized. Pretty sure that line was meant to be drawn, too.

I’m curious, though, what we have to gain by bringing Zemo back into the fold. OK, I guess, you could view him as just another person doing what he thought was right, means to an end, etc. OK… that and the Wakandan connection that existed only to get Sam his new suit….

But lets get back to Bucky. Bucky’s finally(?) made peace with his past, but can you ever really? It’ll be interesting to see what’s in store for him. Is he just Captain America’s sidekick once again or is he going to get an official role in the Avengers? How is that going to work?

So in the end, I feel like The Falcon and the Winter Soldier did two things for the MCU: It set up Sam as Captain America, and its setting up some sort of “criminal underground” sub plot, like I said. With this “Power Broker” business, de Fontaine, and more little hints and clues that were left around… where’s that going to go?

See my comments on the Netflix characters. Yeah, please, Kevin, do it. Just do it. Even let Spiderman play in that sand box, its partly his anyway…

After all that, I’m going give the six-episode package of The Falcon and the Winter Soldier a 3.4 out of 5. It wasn’t nearly as intricate and mysterious as WandaVision, didn’t deliver nearly as much on its connection to the larger MCU, and I felt actually was lacking in the production department. The dependence on things not-CGI, while admirable, and giving the series a firm foundation in reality, also felt, well, a little cheap.

Also somebody should have told somebody, “hey, um, you’re gonna have a bad time trying to fly underneath the moving blades of a moving helicopter….just saying.” Because in the first and last episodes, that is a thing that happened and it just bugs the crap out of me.

So now we are left in Marvel limbo until #$^!#W$%ing JUNE for Loki and JULY for Black Widow when they finally make their debuts. Notice how the two of those got postponed together? I find that very interesting. Guess Disney didn’t want anything competing for eyeballs when The Bad Batch hits.

The Falcon and the Winter Soldier
3.4