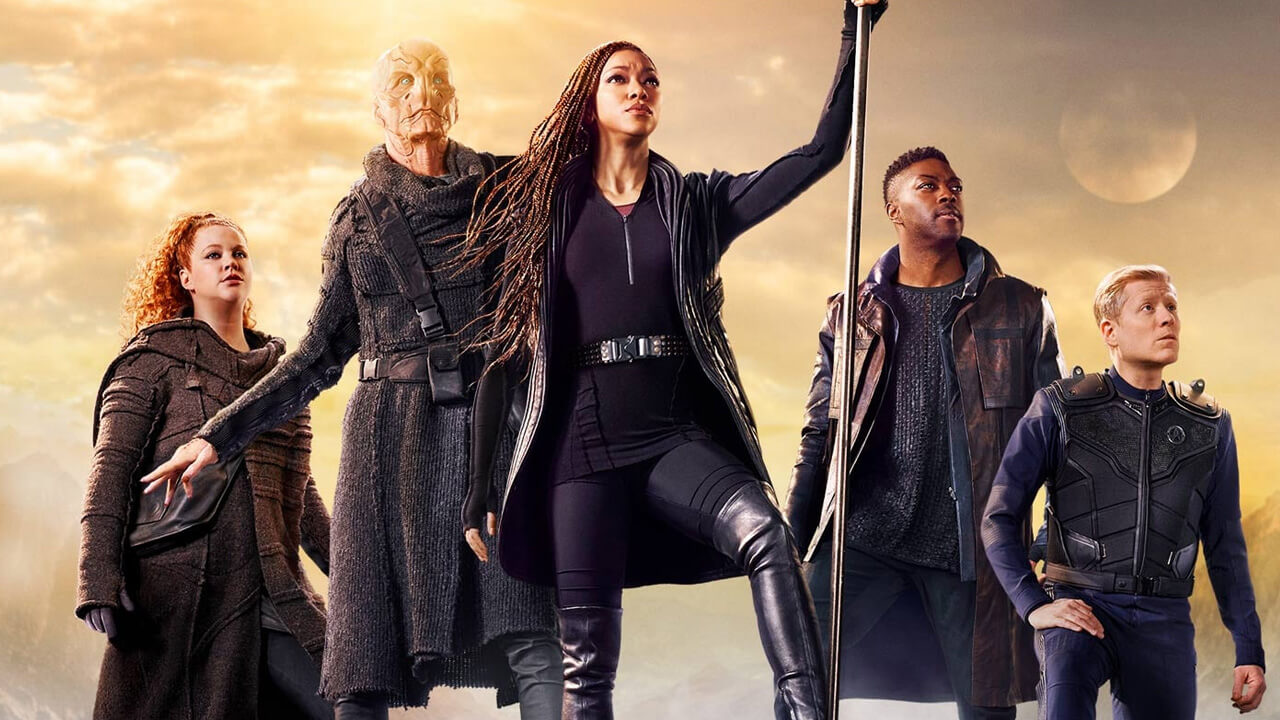 I think it’s the best thing to come out of the franchise since the timeline split at Abram’s film. (And I liked that, too.).

The whole “waaaaah its not Trek waah” crowd can just go now. Go on, leave, stop reading this now, because I don’t care. Discovery IS Star Trek.

And season 3 of Discovery proves it. Oh and there’s spoilers ahead, so if you still haven’t finished (or started) you’ve been warned…

Is it perfect? No, of course not. Matter of fact there are a lot of things I didn’t like about season 3, and a lot that I did. But lets get right to it.

At the end of season 2 (which was also awesome, and I liked better, but this isn’t about that…) Commander Michael Burnham (Sonequa Martin-Green) led Discovery through a wormhole in her super cool “Red Angle” time travel suit…

…and found herself 900 years in the future. So (does the math) I thats something like the 31st century or something. I dunno. But the suit-slash-plot-device self destructs and leaves her stranded. Eventually she meets up with Mr. Cleveland Booker (David Ajala) a Han-Solo-type that we first ran into waaaaay back in one of those “Short Treks” before season 2, if memory serves. (Which hinted at the whole “into the future” story….)

Trek time travel being what it is (as demonstrated by Spock and the red matter) the Discovery comes through the same wormhole, only one year later, and the game is on….

So I could try and summarize each episode in great detail, but I’ll just try and do the entire season in one paragraph or three. Here goes.

In this future, a cataclysmic event called “The Burn” has destroyed almost all of the dilithium in existence, and most warp-capable ships with it. Now that the Discovery has arrived, warp engines, dilithium stores and all, its a hot commodity. After Burnham and the crew are reunited, they go on a mission to rejoin what’s left of Starfleet and The Federation. Which as it turns out, isn’t much. Earth is a paranoid pariah, Federation HQ has moved on to some random location in the middle of nowhwere… and the only one who actually knows where it is is a Trill symbiote, that conveniently (or rather inconveniently) has implanted in the body of a human, Adira (Blu del Barrio) making sure we have plenty of diversity to go around. They finally find Federation HQ, get a fancy new refit for Discovery, and discover the source of The Burn is a Kelpian named Su’Kal, who as it turns out caused it by being scared as a kid. They rescue Su’Kal from his predicament, solving the mystery of The Burn, escaping the evil clutches of the Emerald Chain crime syndicate led by Orion henchwoman Osyraa (Janet Kidder) who’s beaten by Burnham in a properly Kirk-esque fistfight and re-uniting the Federation with the Vulcans. I mean the Ni’Var. Or whatever. The End.

Okay, when you put it like that it doesn’t sound all that great. And I will admit, I did not like this season nearly as much as the previous two. But I still did. And here’s why:

I know there’s a huge contingent of Star Trek fans out there who think Discovery is utter garbage, is nothing like Star Trek, ZOMG you ruined my childhood etc. (Sound familiar?) But you’re wrong, guys.

In each and every episode we find our crew in a predicament that echoes back quite nicely to the core values of the original Star Trek, and even the Next Generation, especially with Frakes directing a few of these episodes again. Whether they are solving diplomatic disputes and reuniting the people of Earth with a lost and disenfranchised colony, helping Su’Kal move past the reality his mother created for him, showing how fragile our alliances can be in the face of crisis, and how to move past it all, or just showing what makes us human, what sets us apart from others, and what makes us the same… The brief exploratory forays into PTSD, gender identity, racism, etc. ALL of the things we sit here now and laud the original and TNG for doing, but not nearly as heavy handed as then. I really don’t see the problem you have… oh wait yeah I do, its toxicity and crying out against “SJWs” and stuff, isn’t it. Go back to 4chan, toxic fanboys… but anyway….

…its Trek, people. Get over yourselves.

Now, that’s not to say I wasn’t disappointed with certain aspects of this season. Let’s take the Sphere data for example. A few times its teased that the data they recovered from “the sphere” last season is alive and well inside the Discovery’s computer. I was honestly expecting it to pull a literal deus-ex-machina and act in its own self interest to save Discovery, but they left it be. I dunno maybe they’re saving it for next season, who knows. But its still here, unless I missed something.

And the ending. What? I fully expected them to magically find another wormhole leading back to their own time. Instead, newly anointed Captain Burnham sails off with the souped up future-clad Discovery into *this* galaxy. Maybe that’s a good thing. Maybe they can invent strange new worlds, and boldly go where literally nobody has gone before. If for no other reason than to shut up the nitpicking trekkies who take issue with every (Klingons) stupid (Mirror Universe) little detail (Guardian) and treat it like its the end of all realities simultaneously. I simultaneously like it for that reason, and hate it because it removes any constraints on the Discovery being “old” and “antiquated” in this time, or even just existing in its own. They also conveniently removed any constraints tying them to the established “Prime” universe and we’ll just have to see how that plays out.

Speaking of that, it was a nice touch to bring the Guardian of Forever into the fold and put Georgio (Michelle Yeoh) back into her mirror universe where she belongs. I fully expect that we will see her and the Guardian in some capacity in the (fingers crossed) “Strange New Worlds” show with Pike’s Enterprise from season 2. Otherwise why would we spend so much time on her little side story. Assuming the show actually happens, that is.

More upsetting though is that the “temporal cold war” from Enterprise is now apparently “over” and in the history of this new future. That’s convenient. I mean, you missed a perfect opportunity for Daniels or another agent to come back and scold everyone on the inherent dangers of time travel etc. Hell, who knows, maybe the cameo by Cronenberg is just that and they haven’t revealed it yet. It would make sense given his fascination with Georgio.

The treatment of Burnham remains consistent, though, and still presents a problem even for people like me who love the show. She’s the “kirk”-esque figure here, getting away with practically everything and every starfleet-defying, prime-directive-breaking, “I don’t accept a no-win situation” moment, yet still winds up as Captain in the end… I’ll admit it is problematic. But like I said, she’s the Kirk now, and since Kirk got away with practically everything (look guys, he did, ok, just accept it) we have to live with the legacy of that character and how much of Star Trek IS that particular avatar…

I also find it refreshing that they *don’t* call back to past shows as much as they could. They absolutely could have dredged up the temporal cold war, made a fanboy-pandering mention of Dax during the Trill side trip, all sorts of things they could have done which might have satisfied the “cameo culture” crowd but they didn’t. I get it, we want just enough to remind us that yeah folks, this is Star Trek, but not so much that it can’t be something on its own…. Last season, while it was a nice ride with the pre-Kirk Enterprise crew, it did weigh things down knowing that they were having to retcon a TON of stuff to get it there, not to mention the characters.

But Saru, dude, what’s the deal? I haven’t done my homework, but Captain Saru (Doug Jones) is honestly one of my favorite parts of the show, and they’d better find a way to pick him back up again after sending him off to the Kelpian homeworld with Su’Kal. They also conveniently walked away from the sphere data problem, but dropped enough hints about it that it should be back in action at some point…. assuming there is a season four. That ending was awfully “final” in its finale-ness, and it had me worried. But it does wrap up this season into a nice neat package and doesn’t leave many loose end to deal with.

Look, the series is taking Star Trek in a new direction. Deal with it fan boys and girls. Do I think its the best thing ever? No, not particularly. It does have its issues and we have to live with some of the liberties it takes with the Star Trek universe. But its [Paramount/CBS/Viacom]’s universe to do with as they please, and it has been for decades.

And I am a fan. At least it’s not The Lower Decks. Don’t even get me started on that barely animated pile of Tribble poo.

If you’re not a fan, I’d like to know exactly what it is about it that you think is so awful. Comment form is down there. You know what to do.