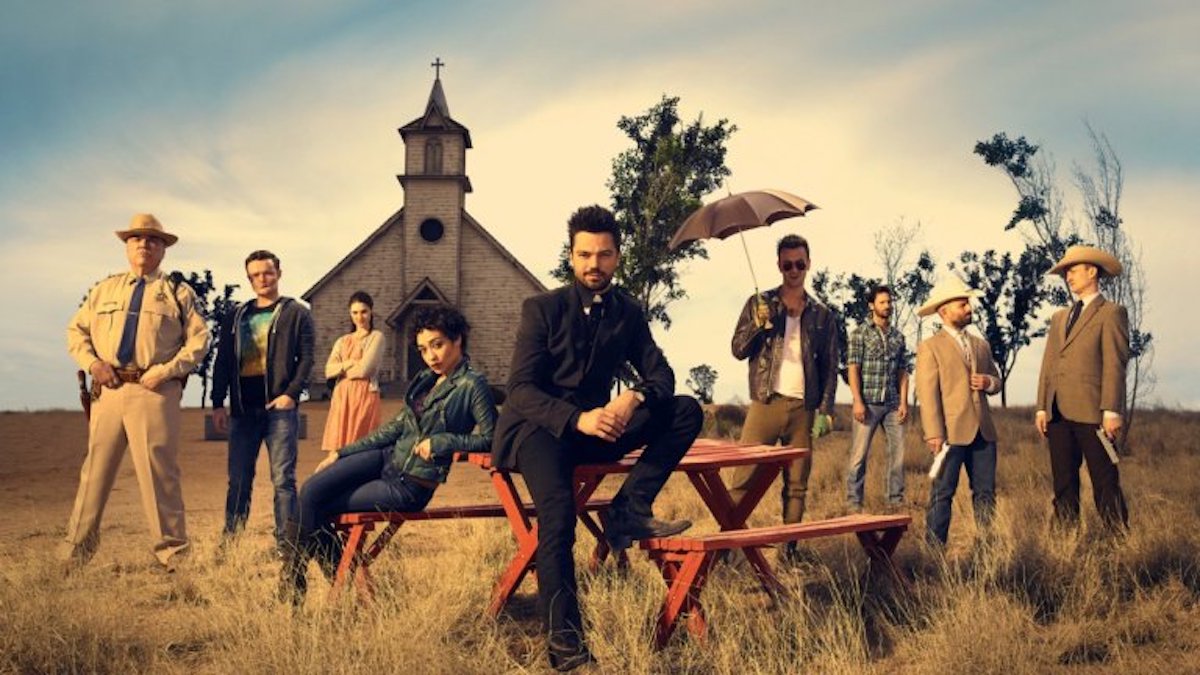 I would have loved to have been a fly on the wall during the pitch meeting for Preacher.

“So it’s about a preacher (duh) who becomes possessed by a supernatural power that causes other people to explode. He’s joined by a tough-as-nails female companion, an Irish vampire, and a misguided kid who blew part of his face off. So then he gets chased by the “Saint of Killers” who looks like a rough-and-tumble old west cowboy, and has to help bring about the second coming of Christ. Oh and the preacher sends the kid to hell but manages to befriend Adolf Hitler, who then takes over and tries to come back to Earth. Wait, wait, wait, then there’s the guys who actually run Heaven and they’re kind of this incompetent group of rejects led by a power hungry maniac with his own designs on power. Did I miss anything? Wait I did, God takes a vacation and the preacher’s grandmother is actually a wicked voodoo priestess…. That everything? Well, the important parts anyway, but trust me there’s more. What do you think?”

Whew. OK, run with it. Did I mention that it was probably Seth Rogen delivering that pitch? Yeahhhhh.

If I had to pick one word to describe AMC’s “Preacher” it would be:

Because from the beginning, the show is hilariously absurd. It’s vile, crude, violent, irreverent (in every sense of the word), blasphemous, hilarious, cringeworthy, and nothing less of four seasons of glorious blood-and-guts lunacy that rarely fails to disappoint or surprise.

So like we were saying, the “Preacher” is one Jesse Custer (Dominic Cooper)…. A criminal misfit who returns to a his small west-Texas town to take over his father’s church. He is possessed by “Genesis,” an otherworldly superpower spirit child of an angel and a demon that is so powerful its literally exploded every host it tries to take over (including Scientology head Tom Cruise.) Until it finds Jesse that is.

He crosses paths with his former girlfriend and criminal partner, Tulip O’Hare (Ruth Negga) and an Irish vampire named Cassidy (Joseph Gilgun) who literally falls out of the sky into his town.

Custer is pursued by two heavenly agents, angels actually, DeBlanc and Fiore, who can’t really die. Well, I mean they can, but they’re instantly reincarnated a short distance away (and out of camera conveniently) which makes for more than one endless (and literal) bloodbath.

OK, I’m going to try and summarize each season of Preacher the best I can, without too many spoilers, but if I drop a couple, try not to get mad, OK?

Season 1: After getting his powers, Custer fends off the angels and other entities vying for his ability. By the end he’s accidentally sent their friend Eugene (Ian Colletti) to hell. Still alive. Don’t try and rationalize it, just go with it. (that’s actually *the* rule to follow here, just let it all happen….). They also learn that God is missing. As in absent, and has hired a doppelganger actor Mark Harelik (actually Mark Harelik, which itself is hilarious) to stand in for him. By the end he’s turned almost the entire town against him, and the fate of the town is, shall we say, rather final and large. No Spoilers, remember. He’s chased out of town by the Saint of Killers (Graham McTavish) and that leads into….

Season 2: Chased by the “Saint” the trio flee to New Orleans, where they get a tip that God might be hiding out there. They hole up in Denis’ (Ronald Guttman) house, who you’ll learn has a special relationship with Cassidy (no spoilers!) … The season does a lot of character development all the way around, just so you know. We meet Herr Starr (Pip Torrens) and his agents Featherstone (Julie Ann Emery) and Hoover (Malcom Barrett) and we start to learn more about their plans for the apocalypse, where the agents have our trio under surveillance. Oh, and did I mention that Eugene gets the cell in hell next to none other than Adolf Hitler (yes that one) and they become best pals.

Season 3: In order to pull off a supernatural miracle (no spoilers!) Custer travels to someplace near New Orleans, to find his Grandmother (Betty Buckley) in order to perform a rather sketchy voodoo ceremony, but one that exacts a heavy toll on Jesse. Meanwhile, in Hell, Eugene and Hitler make plans to escape. Cassidy makes friends with a much older vampire and his squad in New Orleans, and Starr’s final plans are revealed, and we learn of the existence of “Humperdoo”, the only one of an infinite number of Jesus clones/offspring, all of which (including the real Jesus) played by Tyson Ritter. All throughout this season we are treated to various character development side treks and flashbacks, each one fitting into the larger puzzle like that piece you just can’t seem to find.

Season 4: The culmination of three seasons of pure ludicrousness (?) and absurdity, the trio split up WORLDWIDE to make everything right, and prevent Starr’s plan from coming into fruition. Hitler has escaped and has taken over custody of Hell. (I mean, who better, right?) The battle for Genesis basically encompasses the entire season and much blood is spilled, and the world is made right again. Or something like that. Maybe not exactly, but it is a final finale. I don’t expect we’ll be hearing from Jesse Custer and his companions again.

Yeah, look. You have to go into this thing knowing that this is a brainchild of Seth Rogen and company. If you aren’t familiar with his stuff, you should be. Every episode is at the same time hilarious, vile, downright blasphemous, violent, racy, full of profanity and drugs, and just everything your mother told you not to watch on TV.

But its so fucking awesome there really aren’t proper words to describe it. At every new twist and turn you’re left going “What the F#$^@ how are they gonna pull that off?!” only to later be going “oooooohhhhh I get it now.”

They’ve manage to weave together 43 episodes of this sickly funny tale of body parts and bad luck into a great epic supernatural tale worthy of a song that should be sung for millenia. Yeah, I liked it that much. Almost everyone is cast brilliantly for this. From Custer, Tulip, and Cassidy… to Hitler, Eugene and Starr… and Ritter’s Jesus/Humperdoo… Jesus how can you not simultaneously laugh and cringe so hard.

The story itself is one thing, but the way they managed to weave in all the backstories and development, without making “throwaway” episodes or making us lose sight of the plot, is really amazing. Honestly at no point was I left going “wait where did that come from, who is that, etc.”

Is it the pinnacle of writing, effects, acting, filmmaking, etc.? Hell, no. I mean, come on. At times the show’s relatively small budget shows through, but they manage to parlay that into a look and feel that just works. IT JUST WORKS OK.

Here’s the bottom line: If you’re easily offended by, well, pretty much anything. Just don’t watch it. Trust me. If you’re ready to have your limits tested, and have Rogen and company reach into your soul to make you laugh at things you probably shouldn’t, then you really need to watch this.

By the end, when they’ve gone full “Fast and Furious” and turned into a squad of global supernatural warriors armed to the teeth…. You’re just left breathless from laughter,

….and maybe a little squeamish from all the blood and guts that are literally everywhere. All the time.

I’m giving Preacher a 4.2. Why not a full-on 5? Because I’m trying to save those for something truly spectacular. Stay tuned.

Still with me? Well, the trailer for Season 1 is up there (motions toward the top of the article) and here’s season 4’s. Make sense yet?

I hear this was originally a comic series, but I generally don’t do comics so… you’ll have to tell me if its a “faithful” depiction or not.