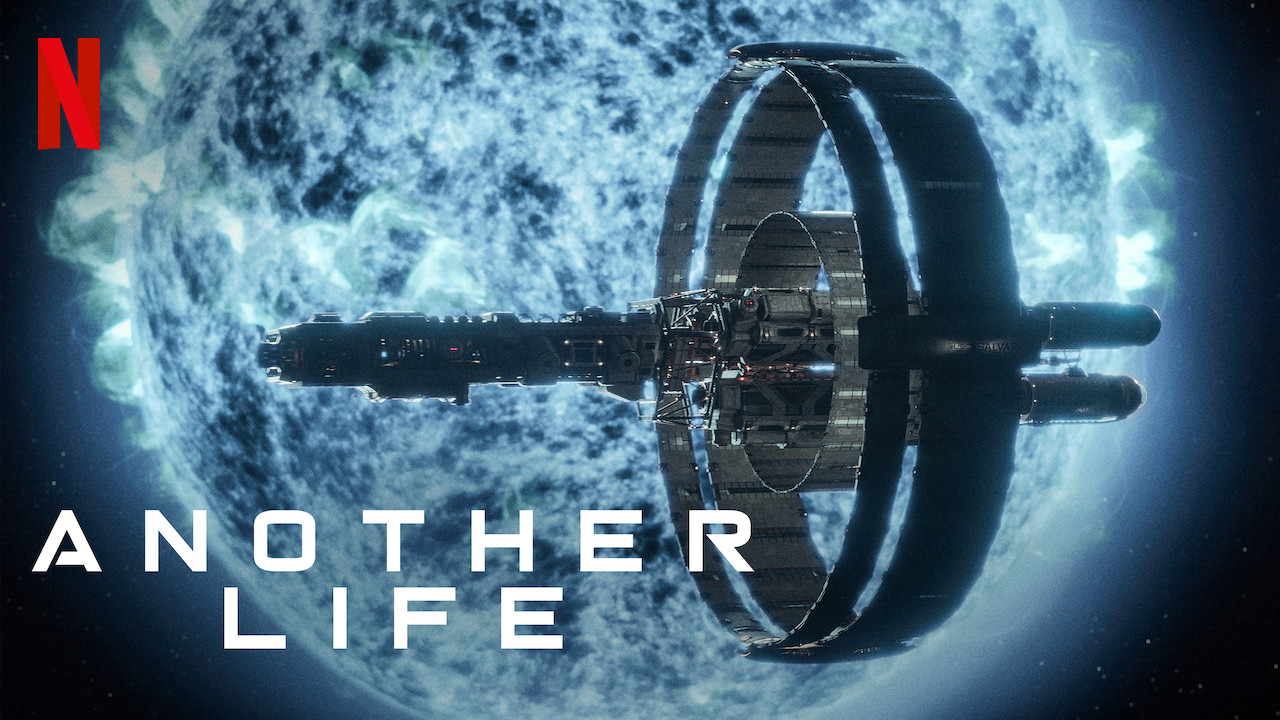 Honestly I’m not even sure where to start about Netflix’s Another Life. I started watching this literally a year ago, and stopped because I just couldn’t take any more of the lower-than-average acting, cardboard sets, and Katee Sackhoff reprising her Starbuck “hard ass space chick” role yet again.

I started it up again because, well, I re-launched this site and figured I’d clean up any loose ends that needed watching, like this and also because I just happened to be bored.

But you know what happened? I’m not gonna say I finished the season “liking” the show, but I did come to see a lot of potential in the story, and I hate to admit it, but the cast kinda grew on me.

So a giant alien object just landed on Earth, and we think we know where it came from, so we’re gonna send a spaceship on a mission to that planet to find out more. Sounds legit, right? Meanwhile, here on Earth, scientists are struggling to decipher the signals coming out of the object.

The lead scientist, Erik Wallace (Justin Chatwin) just happens to be married to the pilot tapped for the space mission, Niko Breckenridge (Katee Sackhoff). So you’re already starting with a healthy dose of soap-opera drama here. Throw in a kid, Jana (Lina Renna), and a past incident involving Niko and her crew, including her former fling…. and you’ve got the antithesis of Gene Roddenberry’s “united crew.”

And that’s basically the meat of Another Life, unfortunately, is this crew of misfits and their infighting and internal soap opera bullshit… you’ve got Niko falling in love with the ship’s Hologram, William (Samuel Anderson). There’s all the who-is-shagging-who thing, of course. I mean, half the show is probably devoted to just this kind of garbage.

Seems like every episode, something bad happens to the ship, they wake up another red shirt from cryo-sleep, only to almost immediately kill them off. It happened twice that I immediately remember, but I’m thinking there were more.

It’s not until the final few episodes of the season that the story really starts to get clicking, as Erik gets inside the object, while the crew of the Salvare finally reach their destination, battered, bruised, and with fewer people…. only to discover that things are not what they seem.

If it hadn’t been for these last couple of episodes I might be inclined to simply pan Another Life altogether. The lead-in for more seasons, that these aliens may not be who they appear, and in fact we may not even know who the real “bad guys” are… It’s like “whoa, now we’re getting somewhere” and then its over.

The show is full of mediocre to weak acting, from a bunch of actors that for the most part we’re unfamiliar with. The sets look cheap and flimsy, like they were put together with duct tape and bailing wire… The overbearing soap opera drama, infighting, and affairs grow tiresome. They kill off I don’t know how many characters, it seems like at least one poor bastard gets the short straw every episode. And the CGI is barely video-game quality.

And Sackhoff. Ugh. I honestly cannot say I’ve liked her in literally anything since Battlestar Galactica. Nothing. The low point for me was that god-awful fake accent in whatever CW TV series she had a role in. Here she’s basically reprising that Starbuck role, albeit without (waves hands around) all the rest to back it up.

And some of the writing and plot decisions for each episode. Just, who comes up with this stuff? I’m not even going to try and go back and give you the details, but there are some real stretches made here, a few even made me wince in pain.

I get that this is “low budget” but ouch. I was hoping for more, and it juuuust started getting interesting before it ended. Is it wrong that I actually want to see a second season so we can finish this story out properly? Maybe throw a little more money around for some decent props, effects, and talent? Checking out IMDb it appears that there’s a season two with working episode titles, so maybe.

I’m going to have to crap on Another Life, though, and give it a 2.0. It’s not the worst thing I’ve ever seen, it does have its moments, though. Maybe my expectations were too high, I don’t know.