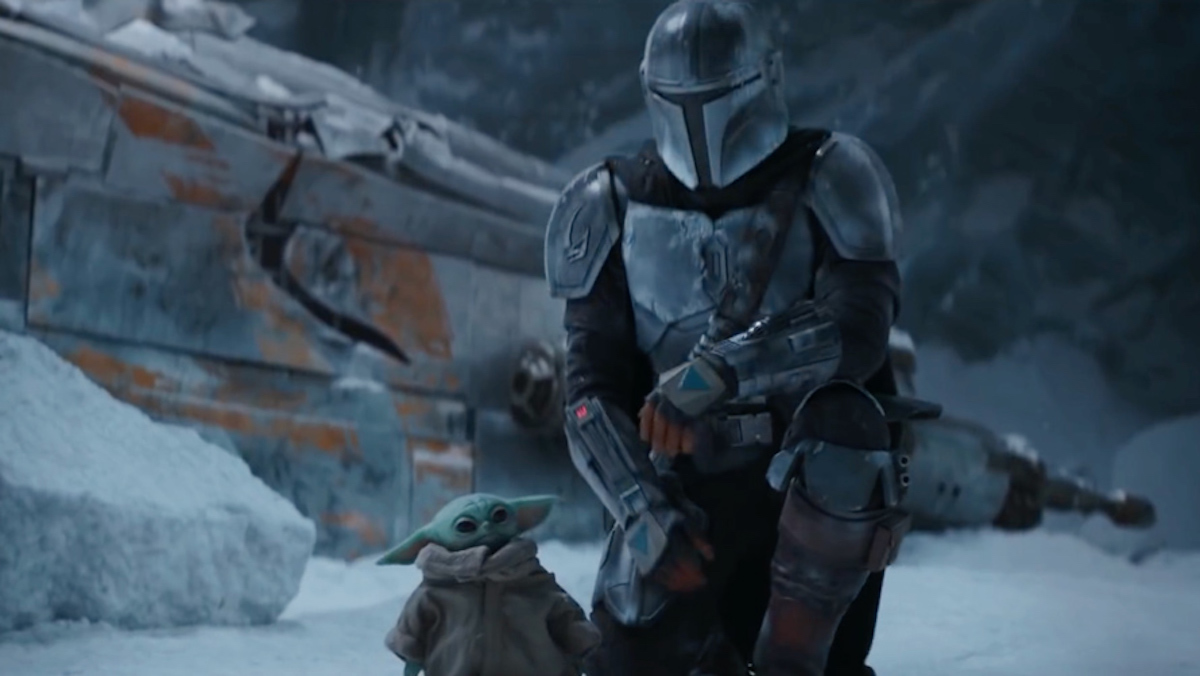 In The Mandalorian Season 1, we followed the adventures of one Din Djarin (Pedro Pascal), aka “The Mandalorian” as he picked up the mysterious and terminally cute “Child” we all came to know as “Baby Yoda” as he tries to keep him safe from the other bounty hunters and Imperial scum that are trying to get their hands on him. It was a breath of fresh air for us Star Wars fans who suffered the Abrams trilogy (some more than others, I had my issues with it but overall would give it a positive rating, just…). We finally get to see some post-Return of the Jedi action. Complete with said bounty hunters, lots of way kewl blaster fights, space battles, aliens, monsters, and yeah, we all fell in love with “The Child.”

Season 2, though, takes this to the next level. No, about ten levels up. If you were alive and a Star Wars fan during the heyday of the original trilogy, you WILL lose your proverbial shit over The Mandalorian’s second season.

The season is done and over on Disney+, so if you haven’t watched it. The entire thing, go there and come back, because there be spoilers here. Probably lots of them.

That said, I’m not even going to attempt to rehash the entire season for you. If you’ve seen it, you know what I’m talking about. You know.

The “other” Mandalorian is back. Yep, Boba Fett.

The last “new” pictures of Boba Fett, well, the adult bounty hunter Fett we saw in The Empire Strikes Back and Return of the Jedi, was that horrible addition in the ’97 A New Hope Special Edition where he nods at us in an awkward fourth-wall breaking moment, letting the fan boys know that “yeah I’m here, go ahead and rub one out, its ok.” Yes, I know we technically saw Boba Fett picking up his daddy Jango’s helmet, head presumably still inside, in the arena on Geonosis in Attack of the Clones. Duh.

But they did it. They really did it. They found a way to bring back Boba Fett in a mostly believable way, and they managed to get Temuera Morrison to come back for the role as the singular non-altered clone. I mean that’s some full-circle stuff right there. You maniacs, you actually did it. AND they brought back Slave I with him. That’s his ship if you didn’t know. To be honest, though, I’m not entirely sure how, they never showed that part. He just shows up with it and we’re all on our trikes in the driveway yelling “THAT WAS TOTALLY WICKED.”

Only reason I say all this first is just to get it out of the way. Yeah I know he’s getting his own series (watch the last episode of the season past the credits) and I hope it doesn’t suck.

Wait, but this show isn’t about *that* Mandalorian, is it? NO! It’s about OUR Mandalorian, Din Djarin, and the kid.

Much like last season, we follow our hero as he protects the kid on his mission to reunite him with the Jedi. Along the way he runs into his nemesis we first met at the end of Season 1, Moff Gideon (Giancarlo Esposito) who is still hell bent on acquiring the kid, and his high “m-count” (Midichlorians for those not paying attention) for what purposes exactly we still don’t know.

Gideon happens to possess the “Darksaber” a jet black lightsaber that we first learned about back in the animated “The Clone Wars” series. Honestly I’m not a huge fan of dragging the animated stuff into this, but its been established that yes, those series are officially “canon” and part of the Star Wars Universe now. So we just have to deal with that. In this season, we learn more about that weapon, and we meet Bo Katan (Katee Sackhoff), who also comes to us via “The Clone Wars.” Again, not real keen on pulling in these elements, but they manage to do it in a way that doesn’t really *require* the viewer to know and understand what or who they are… but it helps. It definitely helps to get that birds eye view.

We’re treated to a few episodes that quite honestly seem on the surface to be filler, just like last time, but allow us to learn about our characters, introduce new ones, like the ex-Jedi Ahsoka Tano (Rosario Dawson), yet again from “The Clone Wars” and “Rebels.” We also get reacquainted with characters from last season, most notably Cara Dune (Gina Carano) and Greef Karga (Carl Weathers).

They travel the galaxy, get in adventures, you know, like Kane in Kung Fu, and eventually the Child… I mean Grogu. his name is Grogu. Yeah, that was a bit of a let down, honestly. Was hoping he’d just remain nameless for a long long time until he could actually talk, but I guess a bit of force telepathy with Tano will have to do.

…eventually Grogu gets stolen again by Gideon, setting up probably one of the most amazing season finale’s in scifi history. Tell me you didn’t about die when that X-Wing flew into Gideon’s cruiser’s bay.

Yeah. It’s Luke Skywalker, in his post-ROTJ black pajamas come to pick up Grogu and take him back to, well, wherever he’s gonna take him. And thankfully they didn’t forget to bring along R2D2.

If you didn’t shed a tear, or at least make every effort not to shed a tear so the person sitting next you wouldn’t see you, as Mando removes his helmet in direct violation of “the way” to say goodbye…. then you’re a soulless animal and I hate you.

The big question, though, is what happens to Baby Yoda Grogu next? I mean, this is kinda the entire premise of the series, isn’t it? This “Lone Wolf and Cub” homage that Dave Filoni and jon Favreau have painstakingly built for us fans. It sure feels that way, doesn’t it? That literally nothing went into the production of this show that somebody didn’t go “yeah that doesn’t fit” or “not using that it doesn’t look StarWarsey enough.” Plus they’ve manage to somehow breath a life of its own into it, from the 1970’s TV theme music to the up until now non-reliance on previous characters and places.

If I had a complaint about this season, it would be that it all of a sudden started making huge and unmistakable callbacks to the movies, and to the animated series. Instead of standing alone, making smaller callbacks here or there, the way Season 1 made us fully aware that The Mandalorian is indeed its OWN show.

Then they’re like, “nah, never mind” and take us back to Tattooine, team up with the Sand People, dredge up Boba Fett, Tano, numerous Death Star references, stick a nameless YT-1300 in the corner of a shot or two, namedrop Admiral Thrawn from Zahn’s now-forgotten books… and cap it off with a giant pile of Luke and Artoo. Oh, and that “Book of Boba Fett” teaser also. I mean, criminy they even made a canon-ized live action version of Kenner’s troop transport toy FFS.

It’s almost like this season existed solely as a setup for these new series. Ahsoka, The Book of Boba Fett, Rangers of the New Republic (you think it was a coincidence those two X-Wing pilots kept showing up?) and the maker only knows what other spinoffs they’ve got planned due to the success of The Mandalorian. I know it wasn’t, mostly. But still….

I’m still not giving it a straight up 5.0, but I will give Season Two of The Mandalorian a solid 4.5. Solid. I mean, I’m a little nervous about what comes next for this show, but I have faith that the 2 F’s will find a way to, maybe not out do themselves, but at least not fail us.

All episodes of both seasons of The Mandalorian are up on Disney+ as of this post….