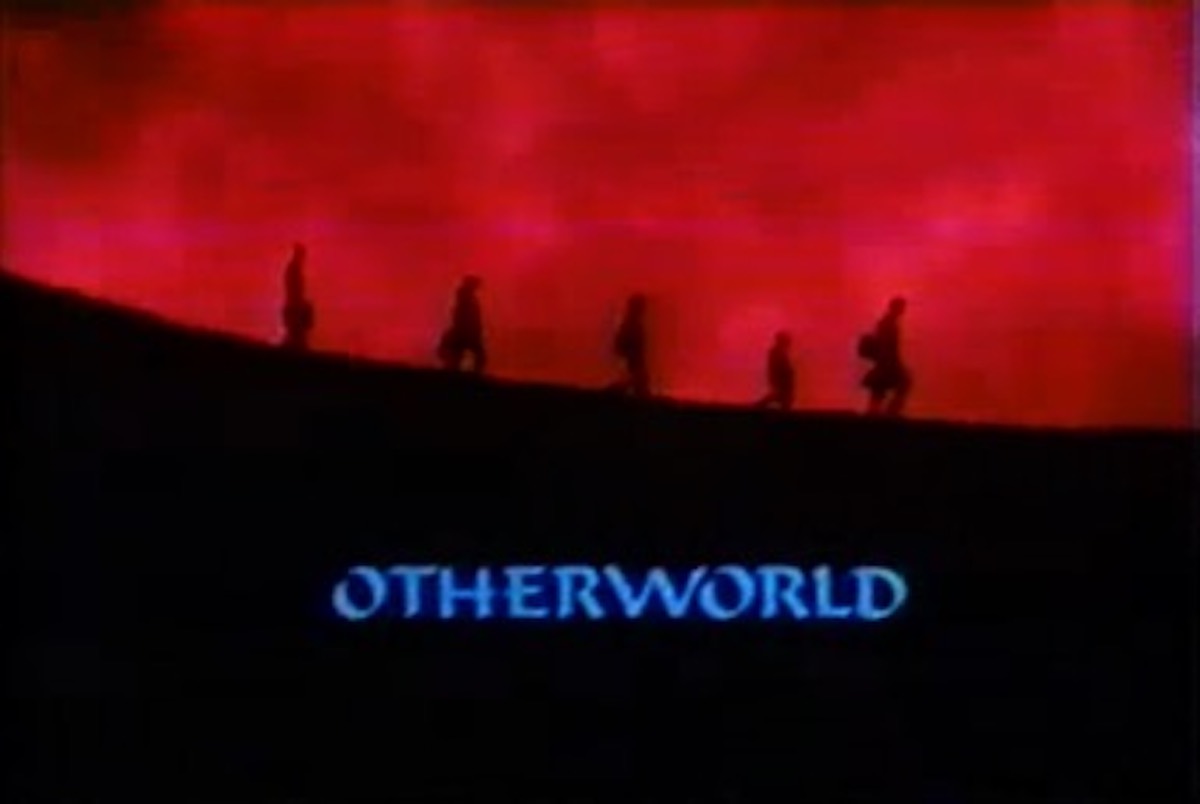 Otherworld, A Lesson in Scifi Failure

So the other day I was cruising through YouTube and saw that episode one of the 1985 (1984?) CBS Television series, Otherworld, was sitting there. I saw the preview clip and immediately was like “OH I REMEMBER THIS” … The Egyptian themed obelisks, the “underhand” laser guns, the silly hovercrafts, the uniforms…

… and so I watched it. I have to be honest, those details were about all that I actually remembered. But this episode showed such great promise as a scifi series. Family gets sucked into another dimension or alternate universe or whatever, has to go on a mission to find a way home without being found by the fascist “Zone Troopers” and the scumlord Kroll (Jonathan Banks)… At least that’s what this pilot for Otherworld sets up.

The family, the Sterlings, is led by the dad, Hal (Sam Groom), the mom June (Gretchen Corbett), Trace (Tony O’Dell), Gina (Jonna Lee) and then-rising star Chris Hebert as Smith, a face you might remember from the contemporary movie The Last Starfighter. In the pilot, and in episode five, Smith was played by Brandon Crane. Don’t ask me why, maybe the pilot and that episode were filmed concurrently, which would make sense… read more on that below.

Along the way they touch on exploring fairly heady scifi topics like “are androids people too,” discrimination, love, what it means to be human… while still forwarding the story of them trying to find a way home.

OK COOL. If you can set aside the completely awful 1980’s television production for a while that is. Let’s be honest, its like they threw a few hundred bucks at them and said “yeah make a pilot.” The effects are not terrible for the day, and especially for television of the day, but the prop masters, set designers, and wardrobe designers were definitely stuck in the previous decade. But like I said, this pilot episode showed great promise. So I decided to um, “acquire” the rest of the series from the internet, all 8 episodes in total, and wonder why there’s only 8.

Then I realize why. The second episode, The Zone Troopers Build Men, isn’t totally terrible, but the lack of any budget shows through big time as they have Trace training as a Zone Trooper officer under Mark Lenard (of Star Trek fame), and a SQUADRON OF ULTRALIGHTS that are supposed to be the Zone Trooper Air Force I guess. Lenard appears annoyed that he’s even there through most of the episode, and we immediately see the MO for the rest of the series. “Hey lets throw this family into ‘situations’ and work them through in each episode, only barely mentioning the original plot or premise at the end of each.”

OK, I think, lets just keep going and see where this takes us.

The third episode, Paradise Lost, they go to some Fantasy Island place, literally an island, where people are farmed for some “life force” drug that the administrator uses…. Said admin tries to steal Hal away, but in the end in a silly bit of TV the island explodes and they flee off to the next episode…

… now I’m gonna just warn you straight up here. If you don’t want to lose all hope in this show, just skip the fourth episode, Rock and Roll Suicide. In this nightmare of simply awful 1980’s television, the kids START A ROCK BAND and introduce this universe to rock and roll via many of the Top 40 from 1985. Complete with a preacher-type who’s hell bent on ridding this universe of the evil music, that OF COURSE has hidden messages in it when you play it backwards. OK, I will admit that was good for a laugh, but Good Lord this episode was so awful I nearly threw in the towel. I can’t remember the last time I sat through 45 minutes of television this bad. Like bad enough even MST3K probably said, “no, we’ll pass on that one, thx.”

But starting with episode five, Village of the Motor Pigs, I notice a new intro, and suddenly we find ourselves back into the place I’d hoped we’d go after the pilot. Them trying to find a way out, almost succeeding, while making an exposition to the effect of “drugs are bad m’kay?” and offering a glimmer of hope that maybe, just maybe this can be salvaged. Here, the kid, Smith, is once again played by Brandon Crane, as was in the pilot. From what I can tell, this was actually the second half of the pilot, or maybe a two-part pilot.

Episode six, I Am Woman, Hear Me Roar, they get all “woke” and shit (lol) by arriving in a province where traditional gender roles are reversed, women rule the world here, and men are treated as second class citizens, slaves, objectified, sold at auction and the whole 9 yards. OK! Now we’re getting somewhere. Yeah its all still all viewed through that crappy shallow lens of 1980’s prime time television, and still crap low budget effects, sets, props, and wardrobe, but it starts to show promise once again as taking chances. Oh, did I mention how “Woke” and “SJW” and “progressive” this episode was, lol. I just have to say it again because THIS STUFF IS PART AND PARCEL of science fiction and is nothing new, despite what the larger critic-sphere seems to think.

Episode seven, Mansion of the Beast, We go right back into WTF mode as they wind up in some weird old-west buckboard riding Beauty and the Beast scenario complete with a living gargoyle face on the wall. Missed it by that much, guys. The “Beast” catches them in his territory and wants to keep June for himself. That’s pretty much it. Who green-lights this stuff, anyway?

And finally, episode eight, Princess Metra, WTF man, hot air balloons? Yet they manage to tease us with the possibility that they might just find the plot again, with some more good old American money…

… and then the series is over. Thank God. I so much thought I remembered Otherworld differently. Of course that’s been 35 years ago, so you’ll forgive me if I might be confusing it with something else. I was hoping so badly that this would be a pleasant trip down memory lane.

It’s easy to see why this show didn’t survive. It’s at the same time bloody awful, as episodes 2-4 plainly demonstrate, and yet shows great promise and explores topics that I honestly don’t think 1980’s TV audiences were ready for. Womens rights? The nerve, to be so “woke” in 1985. Discrimination? Nobody wants to hear about that, is the A-Team on yet? Drugs? Covered in a couple different episodes, I mean, I still don’t get how its possible to show such promise and at the same time fail so miserably.

If you’re gonna go rebooting old stuff because you can’t think of anything new, SOMEBODY please take a good hard look at Otherworld. Take the core premise that the pilot gave to us, and run with it. Keep the “social topic du jour” if you want, that’s cool, but at least make us feel like the “trying to get home” story arc wasn’t just forgotten. THAT needs to be the center of Otherworld. Not this episodic situation crap that doesn’t further said arc in any way at all. Give it a decent FX budget, too. I get what they were going for, kind of a “Star Trek” vibe, where they could simply explore such topics in a scifi context. But damn, FAIL ARMY called and wants to book an appointment with you, ASAP. Roderick Taylor, if you somehow read this, consider taking Otherworld to Netflix or Hulu and sell the shit out of it. It would work.

Otherworld is also a whos-who of 1980s television guest stars. So many faces you sit there and go “I KNOW THAT PERSON” and then you have to pull up IMDb yet again to see where you remember them from. It’s part of the fun, isn’t it?

Here’s the pilot episode that I found on YouTube. Glad they left some of the commercials intact, it adds so much to the experience. Of note is the Stephen King / American Express ad.

The rest of the episodes are “out there” but you may have to take a few chances to get them. I’m not pointing the way. (ARRRR, matey.) Far as I can tell they’re not available on any mass-media or streaming, either. Please let me know in the comments if that’s not the case.

My final verdict? I can’t go more than a 2.0. As much promise as the concept showed, and the pilot demonstrated… The rest of Otherworld was just so bloody awful for the most part, with a few bright spots, but not enough to change my mind. Rock and Roll Suicide FFS, really?