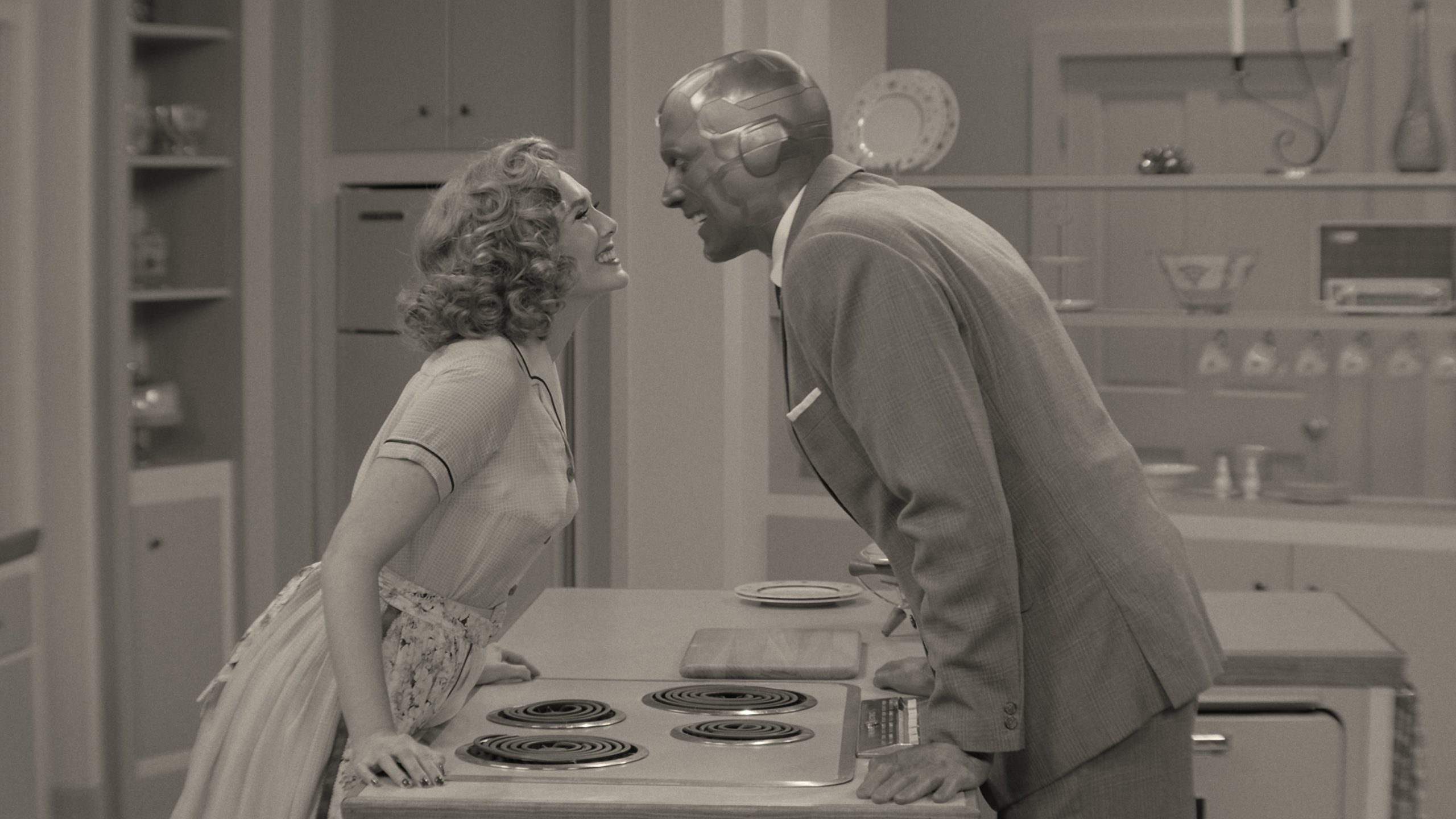 OK, so I just finished watching the final episode of Marvel/Disney+ WandaVision and I just have two things.

…at least for two weeks until The Falcon and the Winter Solder starts up.

Now, like many of you, I bought the hype that there would be an “A-list” cameo show up and completely cause everyone to simultaneously (even though its streamed and everyone would watch at different times) lose their collective shit. That basically didn’t happen. With the information that WandaVision was supposed to tie directly into Doctor Strange 2 and the original pre-COVID MCU schedule…

Yeah, not gonna lie, was hoping for a little more of that “connective glue” that permeates the MCU. Where one after credit scene ties directly into the next big picture with a wink, a nod, and a tip of the hat….

… and instead we get that, but facing the opposite direction, which could be important. But let me run down what happened, in case you were one of the many who quit watching early on because the show was too “Boring” or “weird” or whatever short-attention-span reason you had for bailing.

So yeah, Wanda Maximoff created this perfect TV-sitcom world in the town of Westview, New Jersey, so she could use her reality-bending powers (did you think the red was just to look pretty?) and create an alternate bubble where her and Vision could live the life they were supposed to have. The life that Thanos took away when he turned back time, resurrecting Vision (the first time) and plucked the mind stone from his head.

Instead she kept the residents of the town prisoner in this nightmare reality, forced to play the roles she cast for them on a TV show called (wait for it) WandaVision. And that included, apparently, neighbor Ralph Bohner (uhuhuhuhu you said Bohner) who just happened to be a doppelganger of the Fox-verse Pietro, not the MCU’s Pietro… a nice nod to the recently assimilated into the Disney collective X-men mutants, but that seems to be where it ends.

But, her “nosy neighbor” Agnes, turned out to be “power” (again did you think the colors were a coincidence?) wielding and apparently immortal witch, Agatha Harkness, who wants Wanda’s power for herself. That really seems to be the thing there, that she just wanted Wanda’s power. Unless I missed something really important, that was kind of a downer. “Oh. OK.” I mean there was a gloriously destructive and suitably MCU fight at the end, but it seems to be over. At least for now. I really wish this “reveal” had come sooner, and we’d have more time to explore this character and her fight with Wanda. As it is, it seems rushed and like a lot gets swept under the rug.

Then there was SWORD director Hayward, reviving the broken parts of the “real” Vision in “Project Cataract”… Which was ironically named, if you ask me. What does a cataract do, exactly, except obscure your “Vision?” (And yeah I know its more than that, but come on)

“White Vision” shows up, turns out he’s not actually Ultron waiting to be reborn. Thank god, because honestly Spader’s Ultron was one of the lowest low points of the MCU and I still cringe through that movie every time I see it. No, he’s just an automaton, although we never really see what happens to him after Vision touches his “stone” or whatever it was (that was blue like the Tesseract, interestingly enough… makes you think…) and he just… goes away. But what exactly happened there? Hmmm.

Then there’s Monica Rambeau, who we witness turn into her comic-book alter ego, Photon, without a lot of extra fanfare. The mid-credit scene with her at the theater, with the Skrull, nodding towards her future… up there… We will be seeing more of Teyonah Parris in the MCU. Count on it.

Let’s talk about that theater for a second. If you notice the marquee, it reads “Tannhauser Gate.” Now, for true scifi fans, a part of your head exploded when you saw that, becuase OBVIOUSLY its a nod to Rutger Hauer’s final lines in Blade Runner. As a nod to Vision’s “Android” nature, the fleeting shortness of life in general, and the fact that all any of us will be eventually, is a memory, and can’t be brought back, no matter what sort of mystical magical powers we try to use to do it.

“All those moments will be lost in time, like tears in rain.”

Mind blown. The philosophical discussion between the two Vision’s about Theseus’ ship was particularly tasty, though, wasn’t it?

Yeah yeah yeah, Jimmy Woo, Darcy, whatever, I think they just tossed those two in for comedic effect and a bigger nod towards the (waves hands around) bigger MCU picture, but ultimately neither of them has much to do with anything. I get it, I do, but it was kind of a bummer.

No “House of M” introducing Mutants into the MCU, no “Hi, I’m Reed Richards” Fantastic Four teasers, not even a nod to Hawkeye or Stephen Strange. BUT they did pull in the Darkhold, which if you remember your extended Marvel television universe, was first brought up with another “purple power” wielding witch, Morgan LeFay, in Hulu’s The Runaways. Holy shit, Kevin are you seriously gonna drag all that in here without telling us? That opens up a whole new can of peaches, doesn’t it?

But anyway, in the end, Wanda pulls back the curtain so to speak, and lets the town of Westview go, including the boys, and yes, Vision.

But lets talk about the final scene, the after-credits scene AFTER the after-credit scene. If you didn’t go ALL the way to the end you’ll miss it. Where Wanda has a moment very VERY similar to Thanos’ chilling on the mountain overlooking his new universe. Only here, its assumed she’s isolated herself far, far away from everyone, so she can’t hurt anyone. Plus, she’s doing a kind of Doc Strange moment where her astral projection is studying the magic in the Darkhold.

So my final verdict, on WandaVision as a whole? 3.9 stars out of 5. The entirety of this series could have been boiled down into a roughly two hour movie, no doubt. And it still would have been a four-star MCU movie. The television homage that went on the first half of the series was well-thought out, well executed, and just pretty awesome for people like me who grew up on syndicated reruns. We can relate to that, and it helped us to get inside Wanda’s head and when we see what really happened, it all makes sense.

Like I said, though, I wish the entire Agatha Harkness drop had come sooner, and made up more of WandaVision.

So MCU nerds, No “House of M” introducing Mutants into the MCU, no “Hi, I’m Reed Richards” Fantastic Four teasers, not even a nod to Hawkeye or Stephen Strange. Not even a “Holy shit was that seriously Deadpool?”

BUT WandaVision did pull in the Darkhold, which if you remember your extended Marvel television universe, was first brought up with another “purple power” wielding witch, Morgan LeFay, in Hulu’s The Runaways. Holy shit, Kevin are you seriously gonna drag all that in here without telling us? That opens up a whole new can of peaches, doesn’t it? Gonna just grab a bag of popcorn and wait for Daredevil and Frank Castle. I’ll be over here in the corner.