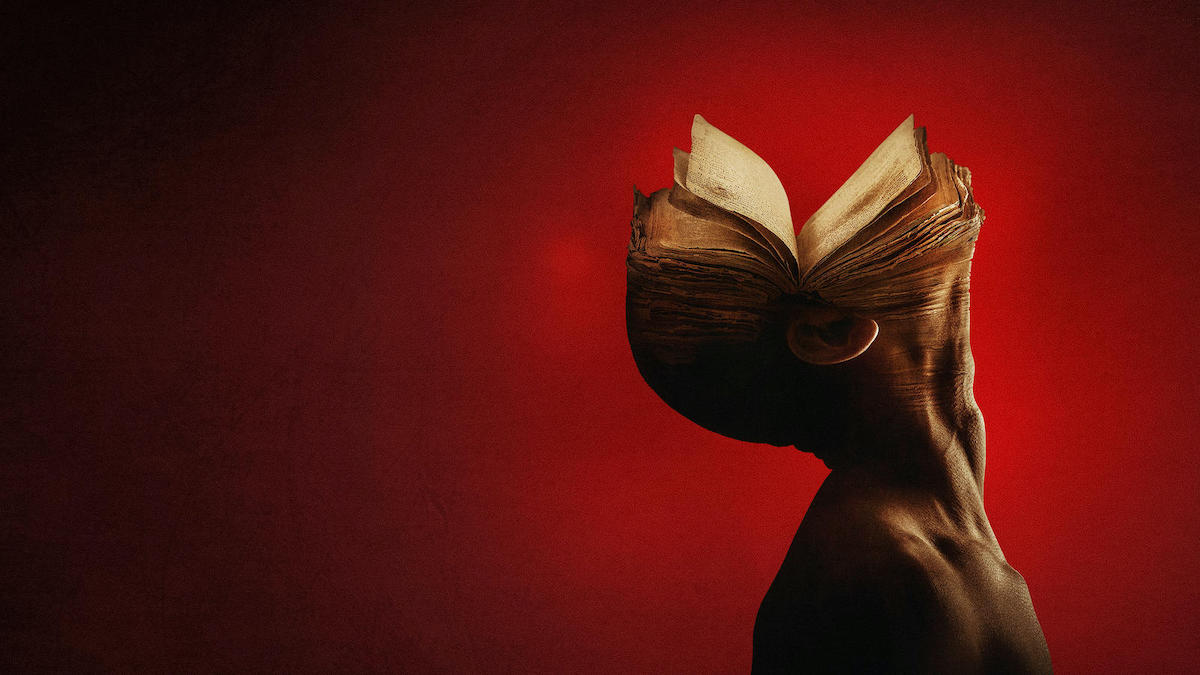 Books of Blood is a movie that premiered last October on Hulu. Adapted from the Clive Barker books, director Brannon Braga brings 3 interconnected stories to life and tries to scare us in the process.

After a brief scene involving two gangster types who set out to find the “book of blood” so they can use it to pay off the typical mob debts (don’t worry we’ll come back to these guys) we find ourselves following a girl named Jenna.

Jenna (Britt Robertson) is a troubled young woman, dealing with not only the death of a classmate in some mysterious incident we don’t know much about, but a handful of psychiatric troubles as well, including a seriously overactive case of misophonia, where “normal” sounds really grind your gears.

She gets fed up and flees to Los Angeles, but gets sidetracked along the way, and winds up at a Bed and Breakfast. The owners are a sickeningly sweet couple who go out of their way to help Jenna, but things quickly go sideways as these huge roaches start coming out of the walls.

Jenna discovers that the floors and walls are hiding a terrible secret: People. The owners have a thing where they abduct people, remove their eyes and tongue, hook them up to an IV and then stick them in the walls and floor to live the rest of their lives in peace. In their minds they’re “helping” their victims.

Weeeellll, the dad of the boy from “the incident” comes looking for Jenna, one thing leads to another and the owners kill him. During this commotion, Jenna escapes and crawls into the guys car…. which then the B&B proprieters send off a cliff.

Wait, hold up now. That’s it? That’s the end of Jenna’s story? Honestly I spent the rest of Books of Blood wondering what the #^@ was up with that. But we’ll get there eventually…

The next story involves a researcher named Mary (Anna Friel) who gets a mysterious videotape of a naked guy in a locked room, the lights go out, strange horrible noises take over, and when the lights come back on, the room is covered in bloody scribbles and images, and the guy is lying on the floor. Whoa!

This guy, Simon (Rafi Gavron) later appears in front of Mary, and he’s been sent by her recently deceased son to contact her. He’s a medium, and has this gift where the dead speak through him, through the bloody writing on the wall. They intend to turn this into a profitable enterprise, when Mary discovers that its all a ruse, a grift. None of it is real, that Simon is just a con man, and that he got all the information he needed from an ex of hers, etc. etc.

What he doesn’t know, is that her son *has* been contacting her, and he’s asked Mary to “Bring him to us.” Which she does, during an investors meeting where they’re supposed to demonstrate Simon’s “ability.”

Instead of the usual grift, Simon gets used and abused by the dead. Instead of the walls being written on in blood, the dead carve their messages into Simon’s body, including his EYEBALLS. What happens is that Simon himself has literally become the “Book of Blood….”

Which leads us back to the two guys from the first scene. As they approach the “Ravenmoore” estate where they’re supposed to find the book, they notice the entire area has fallen into decay. We also learn that Ravenmoore is in fact the house from the second tale with Mary and Simon.

Along the way, the driver, Steve, gets “corrupted” by Simon, and takes his own life. Leaving Bennett (Yul Vazquez) to get the book on his own. Surprise, he finds the book, or rather Simon, who then drives Bennett mad. Bennett stabs himself several times, thinking he’s actually stabbing a horde of rats that have started attacking him. Panicked and bleeding, he flees the scene, and runs smack into…

… our B&B owners from the first story, who are in the process of disposing of another victim. Predictably they kill him, too. Gotta feed the garden dontchaknow.

But then we discover that Jenna survived the car going over the cliff. We also discover the details of the “incident” that’s been troubling her. We learn the horrifying reality that *she* was responsible for this kid’s death. She basically talked him into jumping off a building. Suddenly she’s not such the innocent victim.

She’s come to realize the consequences, and decides…(wait for it)…to go back to the B&B, and voluntarily get stuffed into the floor, with the bonus ears removed service, to escape reality once and for all… the end.

So, honestly I didn’t hate Books of Blood. But I can’t bring myself to really like it much, either. I wanted to. The trailers made it seem like a Hellraiser-like ride into hell courtesy of Mr. Barker, and in some respects it delivered, but only in brief moments. The rest we’re kind of just trying to figure out what’s going on. The abrupt and sudden end to Jenna’s story, or so we thought, left me wondering what actually happened for the rest of the movie. That may have been on purpose, but it was such a total left turn that I found it hard to enjoy the rest.

Mary and Simon’s story, too, I thought was good, but I would have liked to explore that more. Like this needed to be a TV series, or a trilogy of movies at least.

I was also lured in by the prospect of something new from Star Trek alum Brannon Braga. Live and learn I suppose.

It had a certain amount of that 1980’s King/Barker/Carpenter/etc. vibe to it, which was kind of fun. But it unfortunately also added to the “straight to video”-ness that it ultimately couldn’t overcome.