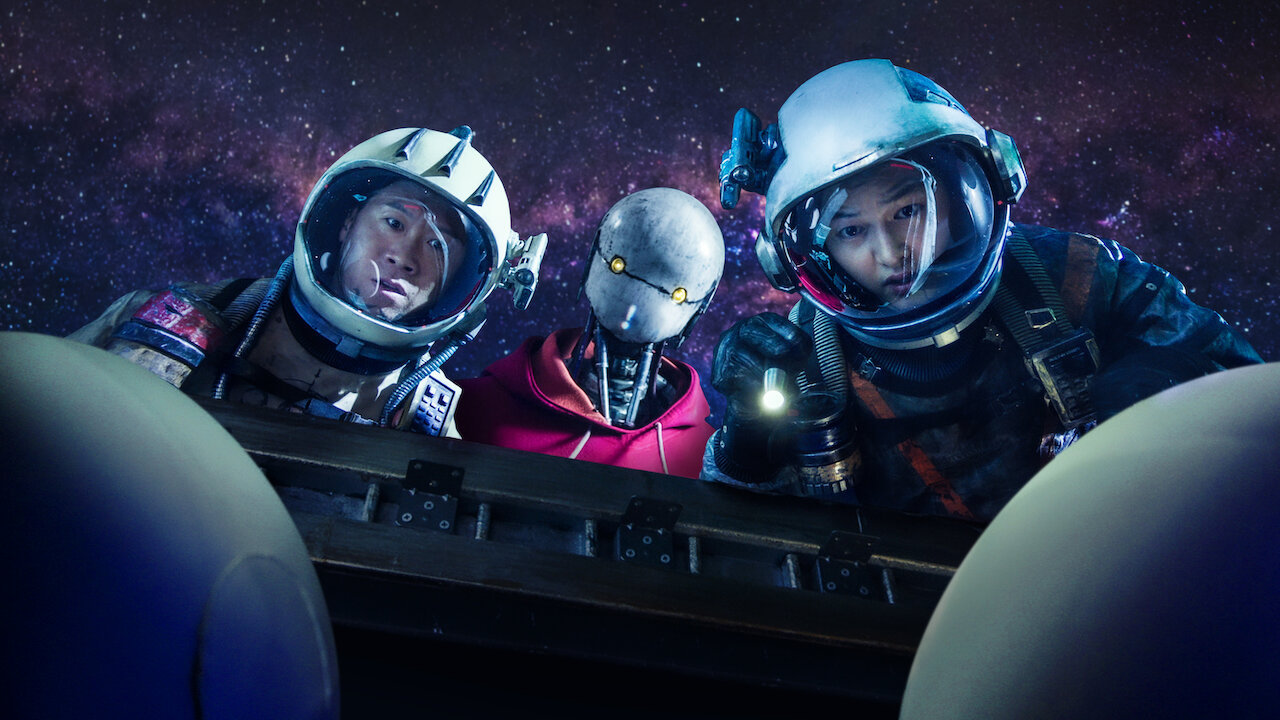 I saw the previews for Netflix’s Space Sweepers a few weeks ago, and I’m like “man this looks silly and its probably gonna be awful.” But you know what?

First, the setup is actually pretty cool. So the year is 2092, and Earth is basically a mess. If you can afford it, you live on orbiting dome cities run by the UTS corporation, run by a man named Sullivan (Richard Armitage).

There’s been so much space commercialization and activity that Earth’s orbit is littered with tons and tons of space junk. A prime opportunity for the “space sweepers” or junkers or whatever you want to call them who collect the junk, salvage what they can and sell the rest, etc.

One of these salvage ships is the “Victory”, helmed by Captain Jang (Kim Tae-ri). On her crew also are Tae-ho (Song Joong-ki) and Tiger Park (Seon-kyu Jin)…. oh and a robot named Bubs (Hae-Jin Yoo).

Backstory on Tae-ho: He’s a former foot-soldier for UTS, and he also lost his daughter a while back, due to a piece of space junk colliding with a station he was on, and it took out the compartment she was in…. This is important later….

One day they’re out cruising for space trash, when they come across a young girl in a derelict vessel, “Dorothy” (Ye-Rin Park). They quickly learn that she’s in fact a walking BOMB robot and they decide to sell her to the highest bidder. Until they discover that she’s in fact a real child, imbued with special powers due to an infection of invincible nanobots. (I know I know, just roll with it.)

They try to take her back to her real dad, which doesn’t go as planned at all. Along the way, too, they discover that Sullivan has been plotting to blow up the huge space junk processing facility, the Factory, andcrash it into earth, causing an extinction level event on the planet. All so he and his rich dome city friends will be the only survivors of planet Earth.

OK. That’s basically it. I know, some parts seem really cheesy and random when I describe it like this. But you know what? The whole thing just works. It just works.

The story is such that it moves and twists at a decent pace, with enough of an emotional roller coaster ride that you’re not left bored pretty much at any time at all. Ranging from all-out sci-fi action sequences, thoughtful introspection, or just comedy, nothing really seems out of sorts or over played… well, I mean basically as much as your average “K-film” likes to do.

Funny bit, at first I actually thought that Armitage was Sean Bean. I’m like “oh hey I know that voice” but after staring at him for a few I was also like “waaaaittt a minute….” It’s uncanny how much these two guys look and sound alike. If you’re then (like me) wondering where I’ve seen this face before, just imagine him 3 feet shorter and with a full beard and long hair. Yep, its Thorin from Peter Jackson’s Hobbit trilogy. He manages to make the best of the strangely written lines he’s given, and plays his strangely basic villain archetype to perfection.

The robot “Bubs” reminds me of a slightly more independent version of K2-SO from “Rogue One,” and with a better personality. Oh and he’s handy with a spear, too, which turns out well. I say “he” but the way this robot ends up I’m just not sure anymore, ok?

I won’t spoil the ending, but its a bit of a twist that until you see it, you’ll be like “oh ok yeah duh, should have seen that coming!” Especially in light of Tae-ho’s daughter and his actions up until then…. doh, careful, no spoilers!!

I would also recommend watching this with the “original” audio, which is mostly in Korean, with smatterings of English, French, Russian, and some strange English dialect that without the subtitles on I’d have literally no clue what that guy was on about.

My final verdict? 3.9 / 5. This movie is just plain simple sci-fi fun, without any over the top violence and unnecessary nudity… Yes its got its fair share of profanity, but what doesn’t any more, right? Go watch Space Sweepers right now!!