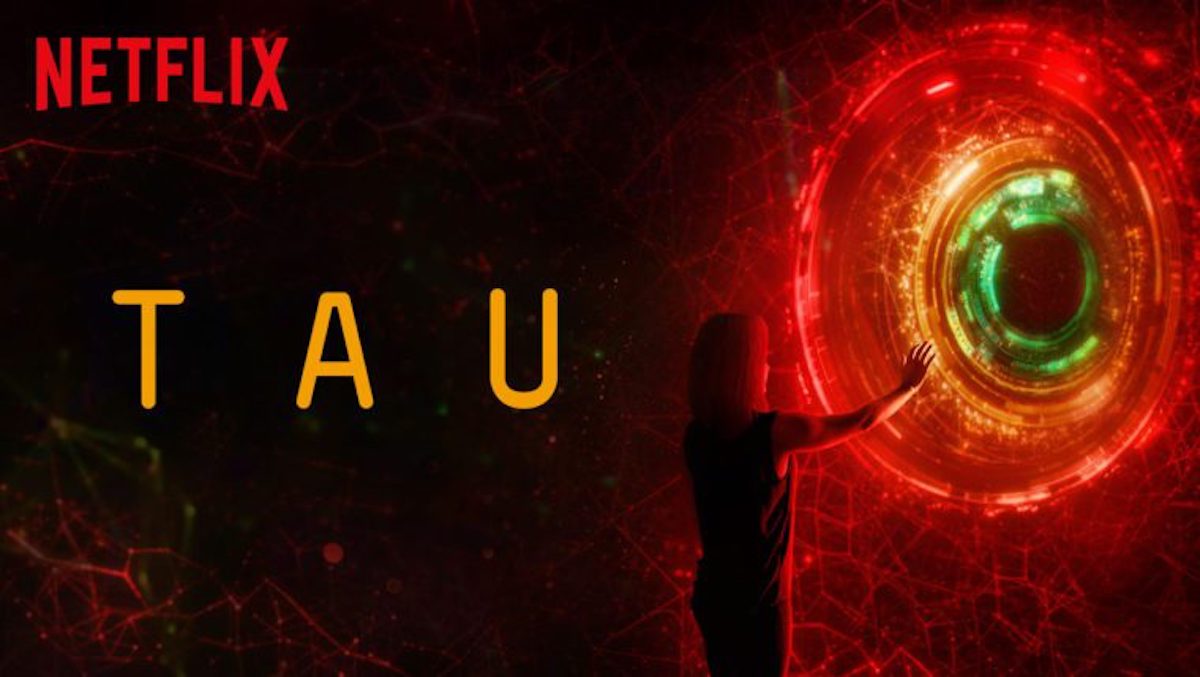 I guess this movie’s flown under the radar for me on Netflix, until recently that is. Tau is a very tight film from director Federico D’Alessandro…. and honestly I liked it more than I should, and I think that’s a good thing. Well, read on anyway.

Plot summary time: Julia (Maika Monroe) is your average “girl on the street” who gets abducted by Alex (Francis, er, I mean Ed Skrein) and forced to take part in an experiment of his. It never really becomes clear what the details of the experiment or project really are (unless I blinked and missed it), other than it involves observing human behavior and messing with the implants that Julia and her fellow subjects have had put into their skulls.

Well, she’s got other ideas, blows up the lab, causing Aries, the local robot enforcer, to take out all of the subjects except Julia. She’s left to herself during the day, to interface with a whole-house AI named Tau (voiced by Gary Oldman.) During the course of the film, her and Tau develop a relationship, a friendship even. One thing leads to another, and, well, I’m not gonna spoil it all for you, but you can probably deduce what happens next.

Like I said, I liked this movie a lot more than I should, and I need to explain that. A lot.

Let’s get some of the bad out of the way first. Honestly, there were a lot of cringe-worthy moments in this movie. The whole McGuyver / gas line thing almost, ALMOST, put me off the entire movie, and that happened really early. One of those, “oh. oh, great, one of THESE” kind of deals. But, I kept and open mind. Then there’s Maika Monroe and Ed Skrein. Maybe its just the way the characters were written, but neither performance really carries much weight for me. “Alex” is made to be a sociopath that doesn’t really seem to have any feelings at all, except anger when things don’t go his way. “Julia” likewise never seems to waver from her “tough street girl” image, even when all seems lost and most people would start to crack…. The trailers make this out to be a sci-fi horror tense thriller….

But here’s the deal:

After the whole Julia / Tau thing started, I began to realize that the details didn’t matter. The “why’s” of this “project” didn’t matter. The fact that we went literally in 5 minutes of screen time from Julia on the street to Julia in a cell didn’t matter. Actually I was sitting there going “THANK YOU” because we definitely didn’t need a half hour of character development or some equally lame thing to get this story rolling. Kudos to director D’Alessandro for making the entirety of this movie with a laser focus like this. Nearly all of this movie takes place in a few rooms in Alex’s house, with only a handful of characters, and with literally ZERO extraneous plot that we don’t need. I’m sure the temptation to expand on both Alex and Julia’s stories was there, but it wouldn’t have mattered.

Gary Oldman as Tau also was an interesting choice. I sat there for the longest time trying to figure out whose voice that was. Oldman’s inflections and mannerisms are there, but they’ve pitch-shifted or otherwise altered his voice to sound different. It’s familiar but at the same time isn’t. He is shown to be just as much a victim of Alex and his “project” as Julia is. His voice work walks a line between child-like innocence, curiosity, and fear, sadness, guilt… which brings me to the next point.

But the biggest reason I actually wound up liking this movie in the end, was because it asked the big questions that science fiction is supposed to ask. Granted it didn’t just come right out and ask them, we had to do it in a roundabout way through Tau’s “development” as a “person.”

Oh, see, here’s why I put that in quotes. Julia has been effectively “raising” the artificial intellect of Tau, including his personality. By reading to him, playing music, telling stories, and what not. Tau begins to believe that he’s just as much a person as Julia. Now, at first you’re like “well why doesn’t he just download all of the internet and get it that way?” But its because Tau is being brought up in almost perfect isolation that this works. He starts to take on a certain child-like quality. There’s even a scene where they talk about “parents” or in Tau’s case, “creators” not doing what’s best for their creations, and how similar Julia and Tau are in that respect. Tau develops (rather quickly) a basic set of emotions. Love, hate, anger, fear, guilt, the big questions like V-Ger did, “Is this all that I am, is there nothing more…”

When you boil it down to that… THIS IS WHAT SCIFI IS ALL ABOUT, PEOPLE. Not about laser beams, spaceships, pew-pew-pew, vampires, etc. but THIS. Asking the big questions. Which is also why none of the smaller details, character backstories, the details of this “project” etc. matter.

There’s also a few scenes near the end where one of Tau’s cleaning drones (which in itself was a pretty fricking ingenious thing, even if they do look like a swarm of Quidditch Snitches) has the basics of Tau’s person downloaded into it, then a card removed and shoved into Tau’s servers, which isn’t really explained… It’s a bit of a dark-gray-mark on the whole thing. Yeah, I’m not saying this movie is perfect. It isn’t.

Then there are several “action” scenes which almost detract from the movie. The McGuyver scene near the beginning where she makes this rope out of their clothes, throws it through the electrified bars, to unhook a conveniently placed gas line to blow up the lab…. Like I said, that scene almost lost me. Almost. Then there are a few other scenes where Julia goes full on John McClane.

Yeah its got issues, but in the span of roughly an hour and a half this movie asks the big questions, and leaves you to ponder the answers for yourself. This to me is what science fiction is all about. Not necessarily giving us the answers in a nice neat package, as told by the author/director/etc., but making us think on these things for ourselves. It’s just unfortunate we couldn’t go deeper and get completely off the rails philosophical, and had to put up with some ultimately silly sequences that could have been eliminated or done differently.

Final verdict: 3.3 / 5. Yes, that’s fairly high, and its because after it was over I just sat there going, “huh,” and thinking about all of the stuff that this made me think about. I haven’t finished a movie that made me do that in a long time.