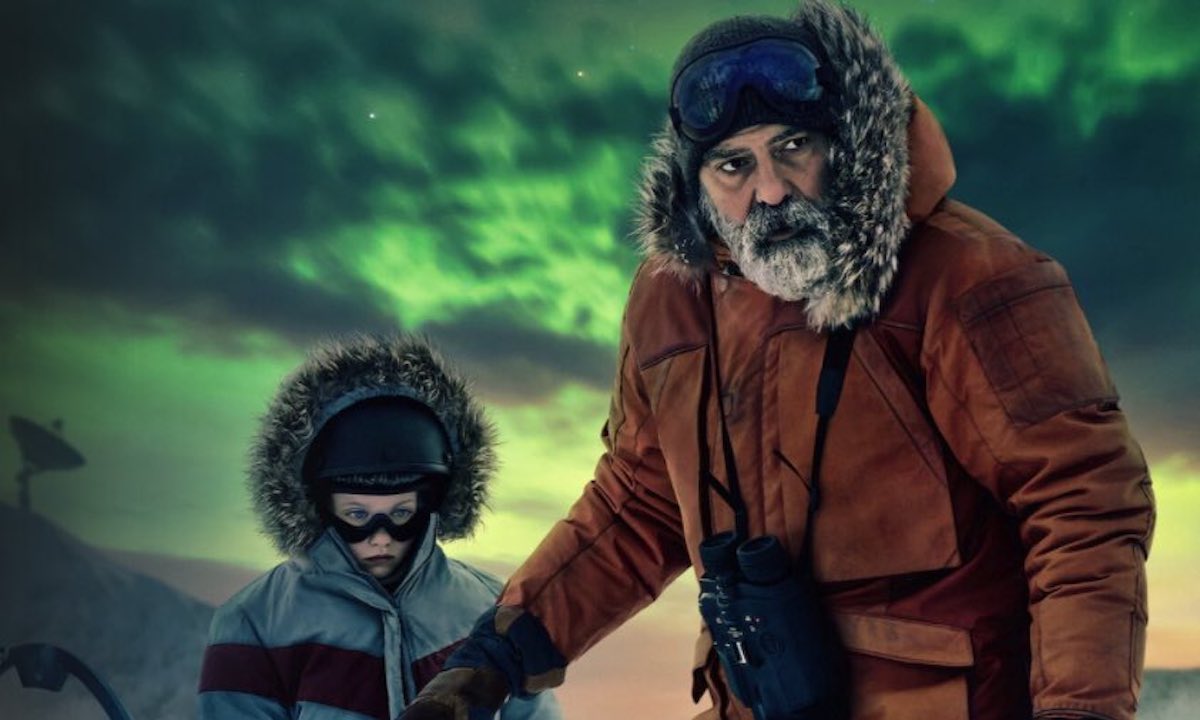 When the first trailers for Netflix’ The Midnight Sky dropped I was like AWESOME something that resembles actual honest-to-god science fiction that doesn’t involve dragons, comic books, the force, or warp drive!!! About time, everyone!

But…. As much as I really really wanted to like The Midnight Sky, I was at the same time satisfied, as well as disappointed. If you haven’t watched yet, there will be spoilers ahead.

Lets summarize though, George Clooney takes on the role of director and producer for this movie, as well as the main character, Augustine. After Earth suffers a mysterious and catastrophic event (a little explanation would have been helpful) he remains at an Arctic research station, because he is terminally ill (maybe I blinked but I don’t believe it was explained either) and doesn’t want to take up space in the evacuation or wherever it is the others are being evacuated to…

… shortly after, he discovers a young girl, Iris (Caoilinn Springall) who somehow got left behind and is also at the station now with him. She doesn’t talk much at all, and Gus can’t figure out where she came from or who she belongs to, so he gets the role of guardian foisted upon him. She is obviously the one that gives him some purpose to keep going, I mean, we just get it, but its never really made obvious. It’s just, that’s what happens, isn’t it?

He realizes that the Aether, a spaceship sent off to explore a previously undiscovered moon of Jupiter (yeah what now?) called K-23. They are returning to what’s left of Earth on their two year mission, and don’t realize what’s happened yet. Why nobody said anything I don’t know, they’re obviously getting communications. *Screams internally, see below*

He tries to make radio contact with them, but realizes his antenna isn’t big enough, and he needs to go to the weather station nearby (that has a huge ass deep space transmitter, for weather purposes, yeah I dunno.) He and Iris set out across the frozen waste. I mean sure who wouldn’t right?

They get there, make contact with “Sully” (Felicity Jones) aboard the Aether. They hatch a plan to slingshot around the earth and return to the habitable K-23 to start a new life, and a new Earth I guess.

Like I said, its a breath of fresh air that we’re seeing more “original” (quotes because yes I realize it was based on a book, Good Morning, Midnight) science fiction films being made.

The M-Knight-esque surprise twist at the end, we should have seen coming, that’s what makes it M-Knight-ish, isn’t it? I kind of expected something like that to happen, to be honest. There were cues but I couldn’t deduce the final reveal, and then it was like “ooooohhhh duh, man, duh.”

Speaking of the ending, if you still have your wits about you, with all the other problems the movie might have, its still an emotional one. Clooney really sells it, once he realizes the truth, and makes the decision to NOT tell the other end the truth….

Look, if you can sit through all of the rest, squirm and grumble and go “yeah ok I guess” and wait for it. It’s worth it. It is. If you’re not a little moved by it then go back to watching the Kardashians or whatever floats your boat.

But, then the disappointment:

Look, I’m all for new scifi, but a critical element of science fiction is this: Suspension of Disbelief.

Having not read the book, I don’t know for sure all of the things that were left out. Pages of explanatory prose that would make the reader go “oh, ok, yeah, that makes sense.”

When there are scenes that make you say out loud “what? how? that makes no sense though!” in a scifi movie, then we have a problem. Warp drive? yeah ok, sure. Aliens? hey sure why not.

Technical details that all you had to do is ask an engineer (cough) and they’ll go “yeah that’s just wrong, man.”

First, the story should have been over and done when Augustine goes for a swim, at night, above the Arctic Circle, in whatever condition a terminally ill guy like him would be. I mean, he’d be dead in like two minutes flat, right? When you have to make conscious decisions to suspend disbelief, there’s a problem. I realize it was just an action scene thrown in to break up the pacing, but sometimes quiet desperation is a thing, too. The entire scene was forced and didn’t really need to happen.

Then the spaceship, the Aether. Again, I’m all for design and aesthetics in scifi. But this spaceship sent out on a two-year (I think) mission looks like a resort hotel. The wide open spaces, the shiny chrome and accent lighting, the holodeck breakfast nook. Bitch please. That shit would look like a submarine for gnomes and you’d be smacking your head on stuff every hour of every day. The majority of space would be used for fuel and rations and oxygen and… *deep breath*

OK, conscious decision to suspend again. Just do it. You can do it. Can it work? Absolutely, it can. There needs to be a subtext that “yeah we’ve solved a bunch of these problems and therefore we can build interplanetary clubhouses.” I give you parts of 2001, Star Trek anything.

The scenes outside the ship, honestly were very very predictable, to the point where I was calling the shots before they happened. I mean, I guess that’s ok, but I like to be somewhat surprised, you know?

Then at the end when two of the remaining crew abandon ship for Earth and leave the remaining two to fend for themselves on the journey back to K-23…. Knowing full well that one of those people is gonna have a kid half-way back… This ship obviously doesn’t fly itself, guys. Just saying.

Then there was the soundtrack. At times it was noticeably overbearing, and when it was, was very “plodding” for lack of a better word. Just, every quarter note a new tone on a piano, bum bum bum bum bum bum bum, OK I GET IT ALREADY. The soundtrack is supposed to be there to tug our emotions in the direction the director and composer want. Not just be a mild accompaniment. That might be a nitpick, but there it is.

Oh, in searching for the book to link to, I discovered that apparently there is a lot of “artistic license” going on, which I believe after watching. Sounds like they had to shoehorn some things in there, and really should have just left it be.

I really wanted to like this. If it hadn’t been for the far-out “wouldn’t happen” moments I might have liked it more. Show us how he survives the freezing swim, tell us more about what happened to Earth FFS, I don’t think it was ever really said. So we’re not left scratching our heads…

…and having to remind ourselves that it’s just a show and we should really just relax. Despite its flaws, I’m giving it a 3/5. Just because of the ending, and the fact that Mr. Clooney made the effort (keep doing it, please.)