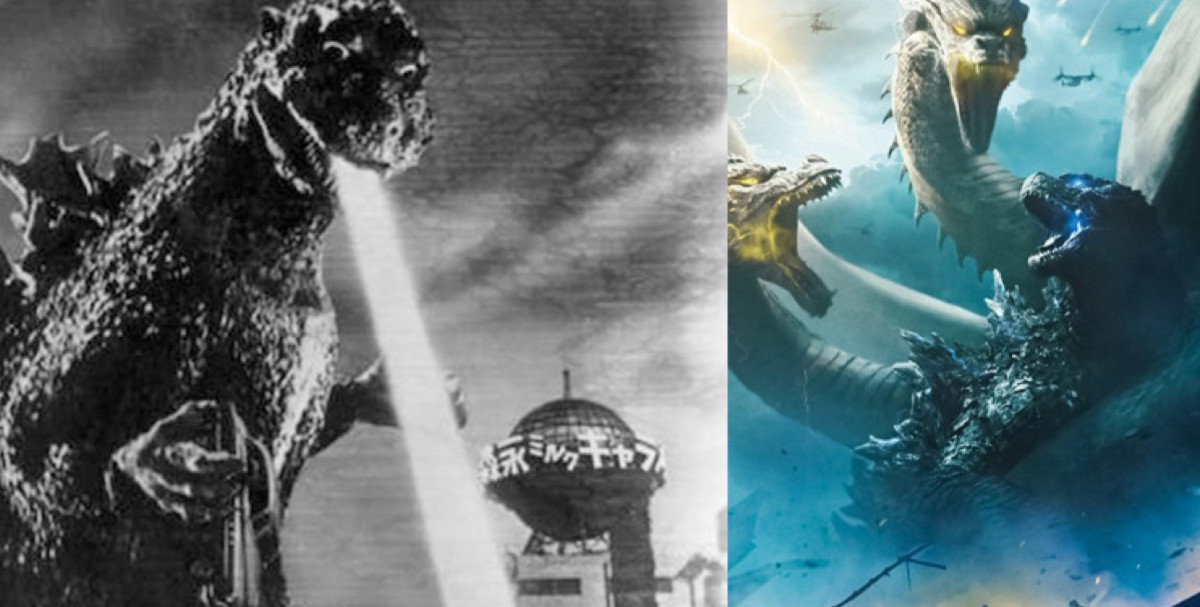 Godzilla: King of the Monsters, Then and Now

The other day I was browsing HBO Max, and realized that both 2019’s Godzilla: King of the Monsters and the 1956 version of the same title are both right there. I hadn’t seen either, and I figured it would be a good time to do a compare and contrast. Let’s just say that some things are better left alone, no matter how much more flashy and loud you make them.

2019’s Godzilla: King of the Monsters puts us right in the middle of a world where the Kaiju have returned. We find Emma (Vera Farmiga) and Madison (Millie Bobbie Brown) working with the Monarch Organization to “birth” a new monster, Mothra. An eco-terrorist squad led by Col. Jonah (Charles Dance) invades and takes them captive, along with their plot device, the Orca, which lets them essentially communicate with and control the monsters.

Meanwhile, Mark Russell (Kyle Chandler) who is Emma’s ex and Madison’s dad, is recruited by Dr. Serizawa (Ken Watanabe) to help track them down.

Emma’s plot device is used to awaken “Monster Zero” in Antarctica, who battles Godzilla and wins this fight, sending Godzilla into retreat. Emma then awakens Rodan in Mexico, who Monarch then lures towards M.Zero for yet another fight, and Rodan doesn’t last long. They hatch this wacky plan to set off an “Oxygen destroyer” and, whoops, we killed Godzilla in the process, but hey Monster Zero, or should we say “Ghidora” makes it out just fine.

But we need Gojira back again! What’s the best way to wake him up and give him a super powerup in the process? You guessed it. Drop a nuke on his ass. So they do, and super-powered Gojira wakes up, fights Ghidorah, and nearly loses before Mothra just shows up, gives Godzilla another powerup who then kicks Ghidorah’s ass.

Yeah I left a lot out. But then again, I didn’t. Look, I am not a big fan of Kaiju movies. Just because they all involve the same thing. Oh no big monster smash, fight big monster, scream scream, stomp stomp, fight again, scream stomp, fight with plot device, win. I mean they’re just all the same to me. This one was no exception, in fact, it seemed worst, just because there was always another silly new invention or plot device or vehicle waiting around the corner to save the day. It was just loud and brutally full of fast-paced action and non stop monster screeches… Ugh. Again, not a big fan of this, and certainly not a big fan of the 2019 version of Godzilla: King of the Monsters.

(Good grief these old trailers are a fucking trip, aren’t they?)

So I start up the 1956 Toho pictures version of Godzilla: King of the Monsters! (with exclamation point, take note.) This movie is interesting to me in a few ways. The first is its actually a Toho pictures movie, but it was sort of a co-production with Toho to bring Godzilla to American audiences, presumably with American faces and in English. Because, well, let’s not even go there, ok?

You’ve got the inimitable Raymond Burr of Perry Mason fame as Steve Martin (in a minute), a reporter who finds himself in a Tokyo hospital after a Godzilla attack on the city. I kept having to stifle a chuckle every time I heard “Steve Martin” because I kept picturing the OTHER Steve Martin with an arrow through his head playing the banjo. Hangups are a bitch.

He gets all caught up in the investigation, and a series of ship attacks near Odo island. The islanders believe that their “sea god” named Godzilla is responsible for these incidents, and a fierce storm that happens. Godzilla shows up properly and makes a fine mess of things.

Martin deduces that this creature was created from the ongoing H-bomb tests in the Pacific.

Meanwhile, Emiko (this movie’s Emma) learns of this movie’s Dr. Serizawa’s terrible horrible “Oxygen destroyer” plot device. Godzilla attacks Tokyo (go go Godzilla) and they manage to lure him into the middle of Tokyo Bay, set of the OD, melting Godzilla down to the bones and the world is safe for now.

Yeah, this version of King of the Monsters is not nearly as, shall we say, “hokey” as the new one. I mean, yeah, its a cheesy 1950’s Japanese monster movie, no doubt. Complete with arm waving guy in a rubber suit. But honestly, I would watch this one again. There’s a lot of very tense moments, a lot of dramatic ones, and there’s some real intrepidation and hesitation about setting off the OD in Tokyo bay. I mean, its only been 11 years since Hiroshima and Nagasaki. These questions about the morality of nuclear weapons, the “fallout” from them, the costs of using them, knowing that someday they may have to be used again…. These are all relatively fresh concepts, and probably weighed on the minds of people sitting in American and Japanese theaters alike at the time. Then again maybe not, I obviously wasn’t there. I’m just guessing.

I’m not going to rate either of these (because there’s no way to attach a double rating to the post) but like I said, I would watch the 1956 version again, but I won’t be seeing the new version any time soon, that’s for sure.

It is interesting to note the things that the new version “stole”, like a handful of names, and the big Oxygen Destroyer plot device. The rest, well, is just lip service.