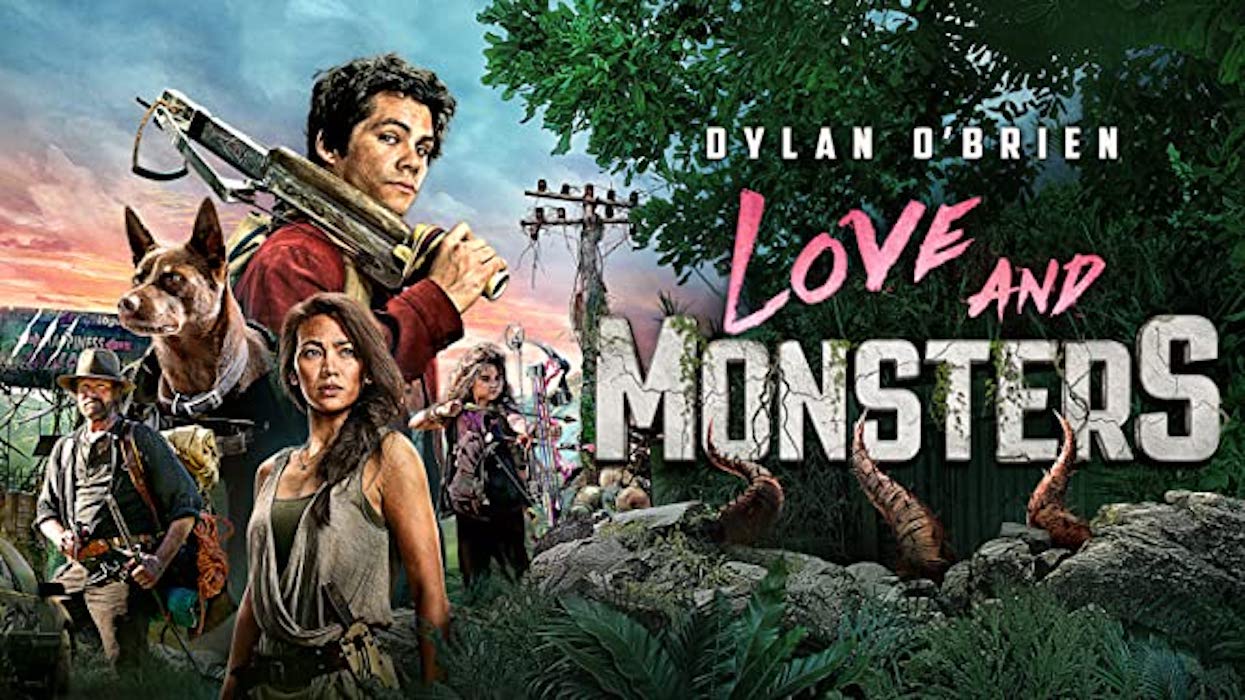 Love and Monsters – Its Just FUN

Every once and a while a movie comes along that you’re really not sure about, but you figure “yeah I’ll give it a shot…” and then you actually like it. That’s what happened with Love and Monsters.

Set in a apocalyptic world where all cold-blooded creatures have been horribly mutated by rocket fuel chemicals… Love and Monsters pits Joel (Dylan O’Brien) against 85 miles of monster-infested wilderness in order to get to his girlfriend, Aimee (Jessica Henwick) who he hasn’t seen in 7 years. See everyone that’s left alive, lives in these underground or otherwise isolated colonies… but that doesn’t even matter.

What you get is, and I honestly hate to use the term, a heart-warming version of the hero’s journey as Joel overcomes his hangups, becomes “a man” (I guess), gets a dog, meets some friends, and runs into some of the most amazingly designed monsters I’ve seen in a while.

Let’s talk about these monsters, shall we? They went for a look here that, if they’re not animatronic in nature, sure were designed to look that way. It gives the movie a certain “realness” that CGI just doesn’t come close to. The film isn’t dominated by endless CGI monster fests and bloodbaths either. I’m not going to go all out and call them “cute” but lets be fair, these aren’t your typical monster movie uglies. I can’t find the proper words to describe it, but they’re just so unique in how they’re “drawn” (both on the screen and in Joel’s book) that you can’t help but feel endeared to them.

The story of Love and Monsters doesn’t rely on your formula monster-guts splatter to move the picture along, either. What you get instead is Joel meeting people, getting in adventures, you know… including “Boy” his new dog. And THANK YOU for actually using a real dog instead of copping out and putting some complete garbage POS computer-generated dog in there. Thank you thank you thank you. Fake animal companions are one movie trope that I’m at the end of my rope with. JUST FILM A DAMN DOG like these folks did. But its not just the fact that he finds this dog, its that he finds a dog, that needs him, that has a (gasp) personality of its own, and has more of said personality and character than a lot of human actors I’ve witnessed recently.

But anyway. He meets Clyde (Michael Rooker) and Minnow (Arianna Greenblatt) to provide the combined role of mentor here. I feel like this part of the film was cut short or something, like there should have been more to this, because both Clyde and Minnow are decent fun characters and I would have liked to have seen more of them. Kudos for introducing a pair of characters for a short time that we actually like and don’t really want to see go their separate ways.

The story is formulaic, predictable, and yeah, you’ve seen similar stories before. Funny thing about “the journey” though is that you can make it into anything you want, and you can either make it suck or you can make it fun and meaningful, which is what happened here.

Joel arrives at Aimee’s camp to find them being scammed by an Australian boat “captain” and his crew, who are just nothing more than raiders in disguise, looking for food for their giant crab that doubles as their boat motor.

But our monsters, you see, aren’t all bad. As Clyde and Minnow showed us, some of them aren’t bad at all. They’re just big and ugly, and trying to make their way in the world like the rest of us. Just like this giant crab, and that’s about all I can say without spoiling it outright.

I can’t say much more about Love and Monsters except that its a good, fun, warm-hearted, dare I say *family* movie that I wouldn’t balk at taking my kids to see, if they were still young of course. There’s plenty of swearing going on, but its 2021 and they’ve heard it all already, I promise. The rest is some cartoony green-goo-splattering violence that you’d expect to find in a funny, monster-filled adventure, right?

And the score, omg, this was one of the first things I noticed, was the incredible original score by Marco Beltrami and Marcus Trumpp. (Sorry about your name, bro.) It reminded me very much of Danny Elfman’s Men in Black score, bringing a certain amount of “lightness” where required, but bringing the full effect where required.

Problems? If I had to dig deep, I don’t think Jessica Henwick was doing her best work here. She just seems to be in the same “mode” every single time we see her. Not sure what I was expecting, tbh. Dylan O’Brien pulls off the transition from awkward proto-hero to full blown legend with nuance and timing, that’s for certain.

You also have to give credit for director Michael Matthews actually going back and FINISHING the story where Joel goes back to his original colony, or rather his new “family” and giving Joel a certain amount of closure and personal fulfillment that would have been lost if the movie had just ended with the boss fight. I’m just saying. And it works, too, without being clumsy or forced or whatever else.

Sure, we’re not talking about Citizen Kane, here, that’s a given. Context is key. With that in mind, I’m rating Love and Monsters a decent 4.0 / 5. I actually liked it more than I want to admit. If you need a fun diversion for a couple of hours that the kids can enjoy, too… this is your ticket.

Pretty sure they left the door wide open for a sequel, which wouldn’t be a completely terrible thing.

Love and Monsters is on PPV here in the states, and on Netflix pretty much anywhere else, thanks lawyers. I think its set to hit Netflix in the states at some point, though.

Love and Monsters – Its Just FUN
4