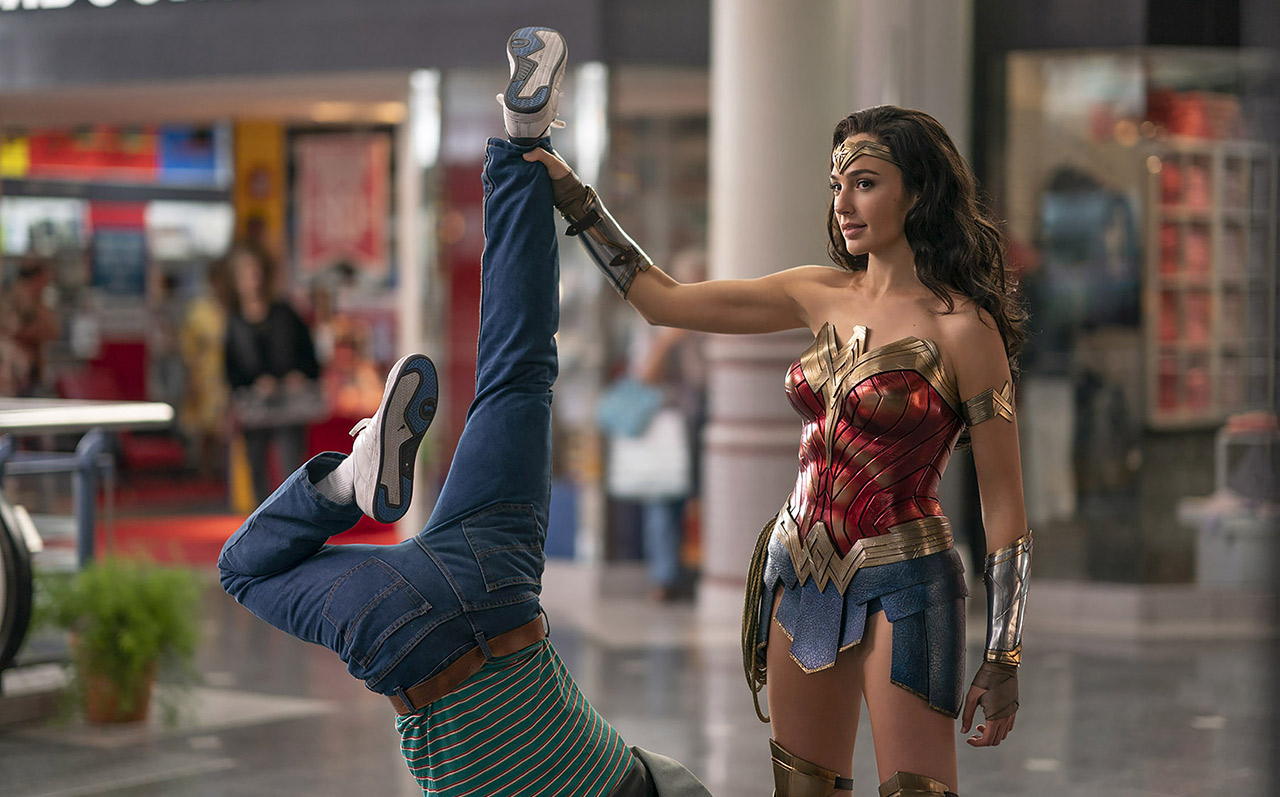 …took a step down for me, unfortunately.

I get what director Patty Jenkins was trying to do here. Make a comic book movie spectacle that was at the same time culturally relevant, had a “message” to convey, and paid homage to all of those cheesy 1980’s scifi adventure movies of years gone by.

But, man, I just wasn’t feeling it. The opening scene with a young Diana trying to win the Quidditch championship while being significantly younger (and less mature), and not being allowed to finish for taking the easy way out and cheating… how did Deadpool say it “with a huge steaming bowl of foreshadowing…” You knew at some point we’d be coming back around to that.

Let’s try and summarize this without getting too deep into spoiler territory, though. So after the mentioned opening scene, we find Diana Prince-slash-Wonder Woman (Gal Gadot) at her Smithsonian gig in DC. She meets up with the mousey and apparently forgettable Tri-lambda alum Brenda (Kristen Wiig) who will later go on to become one of the villains in this picture, Cheetah.

Also appearing is a magic wish-granting stone (the appearance of which I’m not touching with any length of pole) and failed oil magnate Maxwell Lord (Pedro Pascal) who has been searching for said stone for a long time now. Predictably he finds it, and finds a way to use its power to essentially make the entire world do his bidding. But not before Brenda uses its power to make her on an equal footing with Diana, giving her all the 20-rolls that Diana came into the picture with.

The power of the stone to give the “wisher” whatever they want also grants Diana the return of Steve Trevor (Chris Pine), well, sort of. Its a creepy body-snatcher thing that I really don’t get why they even bothered except to give Diana that “I really shouldn’t have done that” feeling, allow for some invisible jet fan service, and set up the cure for the world wide genie-granted-wish fiasco that is evolving.

The rest of the movie consists of one action sequence after another involving Brenda and Diana, and a huge global cluster at the end.

Basically two and a half hours to say there’s no easy way to get what you want without consequences (finish that steaming bowl of foreshadowing) and then I guess Diana gets to go back to the Smithsonian and relative obscurity until she’s called back into action when the revamped Justice League makes its debut later this year.

Honestly I just wasn’t feeling it. There is just so much you look at and go “WHY ARE WE DOING THIS” or “BUT WHAT ABOUT…” like Lords son. Yeah I guess ultimately he’s the reason Lord realizes his grand mistake and brings everything back to reality, but it could have been explored and played much better. It was again a case of “oh I bet that’s gonna come back and bite him later” and sure enough….

The silly golden eagle armor (and I should say that I’ve never picked up a WW comic book in my life so there’s that) seemed like nothing but a silly ineffective plot device and an excuse to set up the final cameo of the movie** at the end.

But I can’t flaw the production designers who went out of their way to mostly present a believable movie version of 1984. So much shopping mall decor, prop car fleet, gold, wood, and wicker that for those of us that remember, actually brought back a few memories. Would have liked to see a few tongue in cheek 1980’s cameos or nods to 80’s pop culture in the background but that’s not important.

What is important is that 2.5 hours later, the whole thing ends in a way that just leaves you going “oh. [long pause] so what was the point of it all then?” I mean… No spoilers but what was looking to be a snap-level world wide event turned into just another “hey lets spin around the earth in reverse that’ll be cool” moment.

And that cameo exists for no other reason than fan service, and unless they’re going to make a place for her in the next WW movie, again, I failed to see the point.

Performances were pretty good overall. Gadot continues with her version of Wonder Woman in the only way she knows how. Wiig, well, I had a hard time separating her from any number of her SNL characters in places, so there’s that. It’s unfortunate but typecasting is a thing. Pascal? Still torn, he seemed at the same time over the top but fell into the “1980’s action movie villain” stereotype quite well. I did feel that Diana’s character had advanced from the “off the boat” rube we saw in the first movie, but still seemed like 50 years of life in America didn’t teach her much at all. And Chris Pine bumbles his way through his limited return as the comedic sidekick this time. Just, why?

I don’t know. I wanted to like it, but I spent the whole movie waiting for something that didn’t come, and in the end, it just seemed like everyone got a big do-over and nothing of consequence actually happened.

Maybe I would have felt different if I’d seen it in an actual theatre, but I settled for my 65″ 4K and budget ATMOS system. Which kudos to HBO Max, didn’t buffer, lose quality, or otherwise downgrade at all (looking at you Disney+)… no doubt it looked and sounded amazing.

** the after-credit scene was none other than Asteria, the previous owner of the “golden armor” and of course the previous Wonder Woman in the 1970’s television show, Lynda Carter. C’mon, DC, stop trying to copy the MCU. Just stop. You don’t need after-credit scenes, and you don’t have a Stan Lee you can do this type of thing with. Make your brand unique.