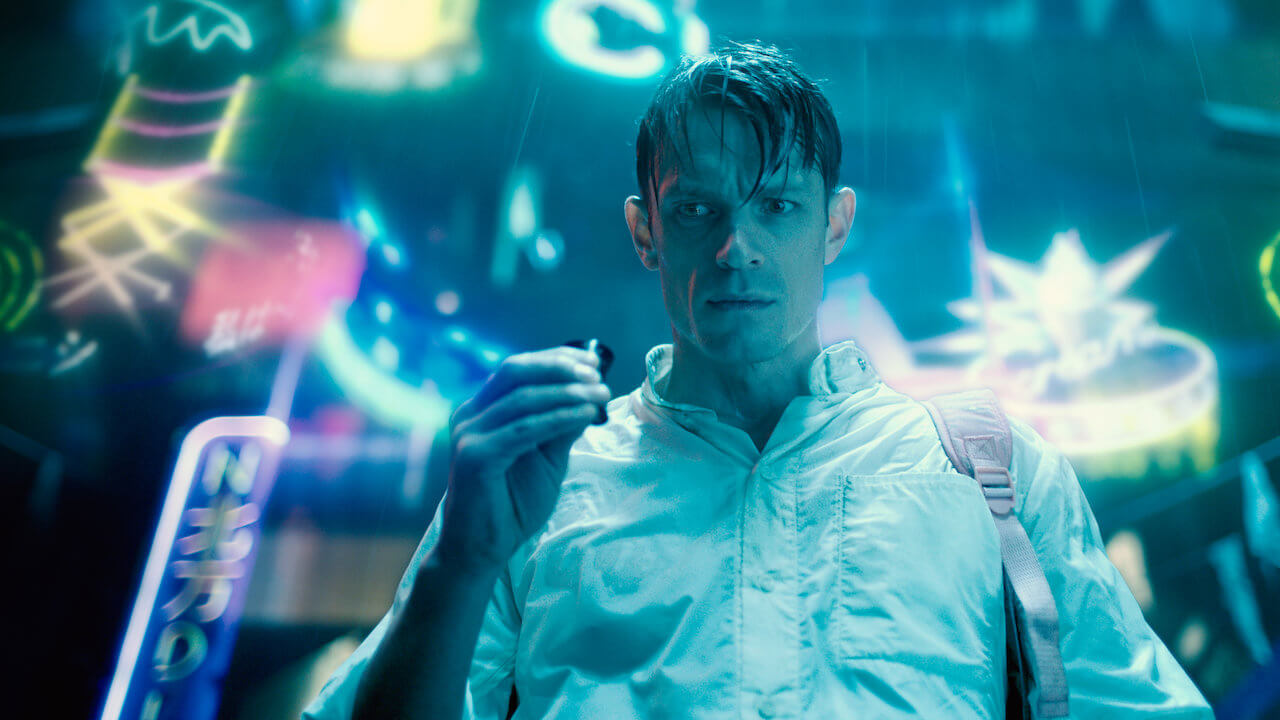 A long time ago I watched the first episode of Altered Carbon Season 1 and for whatever reason, decided I didn’t like it. I know what it was, I convinced myself it wasn’t worth watching, too complicated and convoluted… I don’t know. I figured it was time to take another look. I actually watched both seasons that are up on Netflix right now, my review of the second season is coming soon, but since they are wildly different, in so many ways, I felt it best to split them up.

WOW I’m glad I did. Season 1 of Altered Carbon is one of the most impressive scifi television series I’ve seen in a long, long time. The production is simply top-notch, borrowing heavily (and I mean heavily) from influences such as Blade Runner, The Matrix, Ghost in the Shell, and even skirting fabulously close to a full-on Max Headroom reveal when Matt Frewer shows up as a wildly made up sketchy dealer…. Make no bones about it, you *will* feel right at home watching this show if you’re a fan of any one of these aesthetics. From the rain-soaked neon streets, ramen stands, and flying cars of San Fransisco… to the inner workings of “The construct.” Yes, you’ve seen this before. And that’s the point.

But beauty is only skin deep, and the first season of Altered Carbon goes far beyond, taking us on a fairly complex and thought provoking story, making sure to throw us curve balls that (at least for me) you won’t see coming. It gets very, very dark at times, too.

So what is Altered Carbon about, anyway? You ask…

Well, let me try to summarize a pretty complex and intricate scifi plot for you in just a couple of paragraphs. *inhales deeply and cracks knuckles.*

In 2384, Takeshi Kovacs (Joel Kinnaman) is “spun up” in a new “sleeve” after spending the last 250 years “on ice.” You see in this future, we discovered some alien technology that (among other things) allows us to download our entire consciousness (your “DHF”) into a device called a “stack.” If you’re “in” one of these stacks, you can be simply transferred to another body. It can be a clone of yours, or a totally different one, doesn’t even matter.

Notice all those quotes up there? Yeah, the show just comes out swinging from the beginning with an insanely rich environment, full of jargon and plot devices like this. Is it really a plot device if the entire story depends on it though? Not sure.

But anyway, he was spun up at the request of one of the “Meths”, a very rich and influential man named Laurens Bancroft (James Purefoy.) I’ll be honest, and this is not a slight on Purefoy, but I seriously thought it was Chris Lambert for a while, he’s like if Lambert and Thomas Jane somehow had a kid or something, but I digress.

Bancroft was “murdered” you see. Well, he was, stack destroyed and all. Once your stack is gone, that’s it, you’re done. Unless you’ve got the means to make regular backups of your stack that is. So his current memory only goes as far as the last backup that was made. Kovacs job, is to find out who murdered Bancroft and why.

Oh, its also important that Kovacs is/was/whatever one of a group called “Envoys” that were led by a woman named Quellcrest Falconer (Renee Elise Goldberry)… They were an elite group of highly trained warriors, but they were intent on bringing down the Protectorate, a military/police type of organization…. oh, and Kovacs actually used to be one of them…. Falconer is the Morpheus to Kovac’s Neo. There’s no mistaking the influences and heritage going on there.

See, this is not going to be easy, explaining this “simply.” He and his sister, Reileen (Dichen Lachman) were split up at a young age, with him going to the CTAC division via the hardass lifer who rescued him, Jaeger (Daniel Bernhardt), and her getting sold off to the Yakuza, which when they are reunited (you didn’t see that coming?) … puts both of them into this Envoy group. Did we mention that Falconer is just a pseudonym and she’s actually the person who invented this whole stack/sleeve thing back in the day?

Then there are the “AI’s” which are exactly what they sound like, sentient computer programs that manifest themselves as holograms, along with the environments they were built to maintain. For example, Kovacs joins up with an AI named “Poe” (after Edgar Allen Poe, played by Chris Conner) who runs an “AI hotel” (meaning it can be literally whatever you want, via the holographic systems)… The AI’s can also freely come and go within their network, and talk with each other there…. oh, and humans can also go there, via VR, and so can people “inside” just a stack. Just drop it into a connected vat of goo and you’re good.

So one thing leads to another, this complex web of intrigue and a pretty damn good detective story unfolds.. Oh yeah, speaking of detectives, he also meets and gets involved with a detective Kristin Ortega (Martha Higareda) who it just so happens was romantically involved with the former owner of Kovacs’ “sleeve” …. whoa, yeah, like I said there are some twists and turns and you really have to be paying attention from the absolute beginning to make sense of it all. Its like “oh shit yeah that is pretty damn important to the story, don’t forget it.”

Where was I, so Kovacs, Ortega, Poe, and yet another partner, Elliot (Ato Essandoh), Elliots wife who was spun back up in a male sleeve, and his daughter, who exists only in VR… ultimately solve the mystery of who killed Bancroft…. and a slew of other mysteries in the process.

And yeah, I know I left *a lot* out of this summary, because there is just so much going on. I didn’t even touch on the Neo-C angle, the Matrix-like torture scenes, the off-world references… My god this world is just so fleshed out and detailed…. yet it simply ALL. MAKES. SENSE. In the scifi frame of reference of course.

So lets see, we’ve got excellently complex, compelling, unpredictable story… Amazing production, detailed and intricate “lore” … What am I missing?

The people! Kinnaman, Higareda, Conner, Goldberry, et al are for the most part excellently cast, and deliver decent to excellent performances throughout. The one that sticks out for me as not all that stellar is Lachman as Reileen. Just, I can’t put my finger on it but she didn’t cut it for me. She didn’t seem all that menacing or animated in any respect to be honest. The chemistry between Kinnaman, Higareda and Conner especially though are essential to the series, and these 3 pull off their roles with ease. Kinnaman especially fills the jack-of-all-trades action star role to a tee, switching between fight modes, light comedy, romance, and outright fury without muddying any of them up. At first I was skeptical of him in this role, but he quickly grew on me.

The ending, though, is a spectacle that would have been worthy of the big screen in itself, in scope, plot, and performance. I hope I haven’t spoiled too much, because when the big “whodunnit” scene at the end comes, it is all well worth it, as is the parts after.

What can I say bad about season 1 of Altered Carbon? I’m sitting here trying to think, and literally nothing comes to mind. If anything the complexity of the plot and the world it exists in might be enough to confuse and scare people away after just a couple of episodes. Like I’ve said, there are things that if you miss where they define them, you will get lost. PAY ATTENTION and you will be rewraded.

I can’t praise Altered Carbon season 1 enough. Look, just find the time to watch it, you’ll (I hope) be as taken and amazed as I was…. Unfortunately, season 2 doesn’t continue in its big brother’s footsteps, and we’ll get to that soon enough.

I’ll rate Altered Carbon Season one a full-on 4.4 / 5. Yeah, deal with it. It pushed all the right buttons and checked all the right boxes for me. A decent blend of style, comedy, action, intrigue, drama, romance, I mean shit, its got it all.

This official recap clip actually spoils part of the ending, so you’ve been warned.