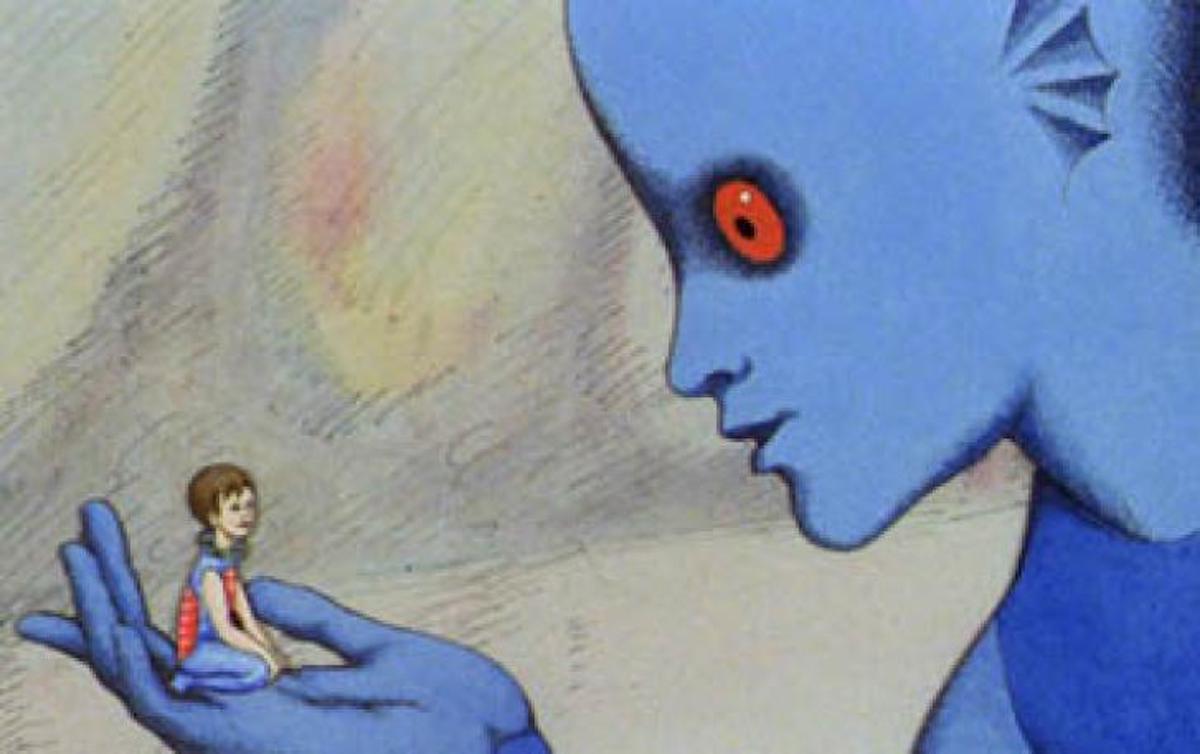 Where to begin. Perusing the science fiction aisle on HBO Max, I come across a pretty cool looking animated alien, and I’m like “WTF is this about?” I don’t remember ever hearing about this 1973 animated scifi movie, Fantastic Planet before. EVER. Maybe I have in passing and just forgot about it, I don’t know, but I had to give it a shot.

After watching, I have to say the English title is just wrong. The translation of the French title, La Planète Sauvage, is literally “The Wild Planet” or “The Savage Planet” and that would make much more sense given the content of the film.

So Fantastic Planet was awarded the Grand Prix special jury prize at the 1973 Cannes Film Festival. It’s based on a 1957 novel, Oms en série by French author Stefan Wul. Take that with a grain of salt, I know, just because the scarf and Nat Sherman crowd likes it, doesn’t make it great.

But honestly, this was a fun, though provoking, definitely interesting acid trip of a movie. Stylistically it’s like if Terry Gilliam’s Monty Python cartoons had a baby with any of Ralph Bakshi’s stuff. You don’t see full-length hand-drawn animated features like this any more, and that’s really a shame, because you can see the care and human touch put into every frame.

The soundtrack, though. My god, the soundtrack is a mix of pre-Dark Side of the Moon Pink Floyd, boom-chicka-wowow pr0n music, and almost any early 1970’s TV show. And you know what? It’s pretty freakin’ awesome. The Gilmour-like steel guitars pair off with the Bullitt-style action sequences to perfection.

But the plot… [Long pause while I think of the best way to describe this…] So on this planet, there are humans called the Om. The “Om” were brought to the planet “Ygam” many moons ago by the Draags. The Draags are gigantic blue creatures with giant red eyes. A true “REM” in the scifi use of the word.

The Om are essentially animals to the Draag. They keep some as pets, including our protagonist, Terr, named for Terra obviously. He’s kept by a Draag youth named Tiwa, who cares very much for Terr.

Terr, however, soon begins to share in Tiwa’s lessons, and becomes quite educated. One night, he steals her headset that the lessons come from, and escapes into the woods, where he’s captured by a wild band of Om. They all begin to use the headset, and become organized, eventually rising up against the Om. They steal a rocket, and travel to the planet’s moon, where they discover and threaten the very way of life of the Draag. Eventually they make peace with the Draag, and are allowed to live in peaceful co-existence.

That’s the TL;DR version, check the Wikipedia link below for a more detailed summary.

But, I mean, yeah, Fantastic Planet hits all the bases for a movie out of the “Golden Age of Scifi” as I like to call that period from about 1966-1976, in between the Twilight Zone and Star Wars, where scifi was meant to be allegory. And Fantastic Planet is no different.

As I said I think the translation of the title is bad. From the first frames of the movie, we are thrust into a planet where, much like on Earth, nature is a cruel, undiscerning, uncaring bitch. Creatures die and are killed for no particular reason at all, or simply matter-of-factly as steps in the food chain.

And the creatures, OMG. Part of the glory of this movie is the interesting, imaginative, clever, and often funny scenes with various alien life forms going about their business. Yes, this involves eating other wild and crazy creatures. There’s one scene in particular (I think its in the trailer below) where this birdcage like creature just grabs another flying creature, shakes it violently, and then throws it to the ground, where its revealed that there are hundreds of victims. Why? Because that’s just the way “birdcage monster” is I suppose.

There are many, many, other levels to Fantastic Planet as well. You might say that this is an attempt at an “animal rights” treatise. The way that the Om are treated, as pets to be owned and used (and abused), and/or pests to be exterminated, it forces you to see yourself in that position. I was honestly just sitting there going, “wow, that’s fairly deep.” When Terr appears to the wild Om, wearing the silly costume that Tiwa puts him in, he’s laughed at and humiliated, and really doesn’t understand why. The beginning scene where Terr’s mother is picked up by a mysterious hand, dropped, and killed… and it was a Draag child just playing rough with it. “Oh, the Om died, that sucks.” Like it was a hamster or something.

Then there’s the Om organizing against their oppressors to fight back and win their independence. That one is pretty obvious. Call it pro-union, call it pro-freedom, I don’t really care. It’s there, and shows us the power of many.

I’m not gonna lie, there’s a non-zero probability I may have been “medicated” when I watched Fantastic Planet. That might have played a part in how I “took in” this movie. Everything from the music to the at-times wild and crazy visuals…. If you’re into such things, it might be worth the trip so to speak.

Fantastic Planet is on HBO Max. I highly recommend seeking this one out. Like I said, I do not ever remember seeing this before, or even hearing about it. I’m going to give this a 4.3 out of 5. Yes, that high. The “Golden Age” factor for me is worth a full point alone, and the creativity and thought that went into it, is just simply incredible.

The whole thing is on YouTube as well, just search it out. Only caveat is that its in French with iffy subtitles, so….