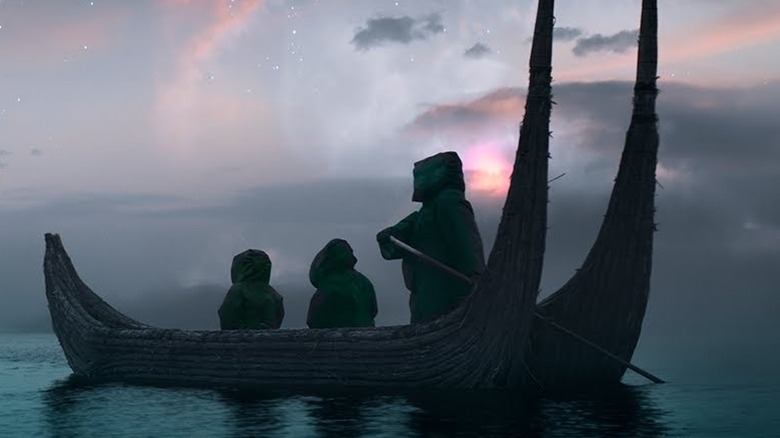 Disclaimer: I have never read (that I recall) Isaac Asimov’s Foundation novels. At least not that I remember. So I have zero reference for literally any of the story or characters. Maybe someday I’ll have time to pick them up, but today is not that day. So you’re getting a virgin’s review of the first five episodes of Apple TV+’s Foundation.

I will try not to spoil anything too terribly bad here, and focus more on the high-level aspects of the story, and the production, acting, writing, etc. instead. When its all over in November, you’ll get a full review.

Short version: So far, I am in love with this show. I will explain why, but just know that I find it infinitely refreshing to see some good “hard” scifi get a decent treatment on screen. I understand that fans of the novels may not agree with me on this, and that’s cool. When I finally get around to reading it I may, too, share that opinion.

Like I said, I’ll try not to spoil much, except to try and “set up” the story and let you pick up from there.

A long time in the future, well, I’m not sure this is humanity’s future, but its somebody’s far flung future, into the tens of thousands of years anyway, we find ourselves in a great galactic empire. It’s run by three clones of the first emperor, Cleon I, which are just referred to individually as “Empire.” I think we’re on the 12th iteration at this point. How it works is when the oldest dies, or rather is retired, another clone is “born” and left to be raised by the other two, such that there is always a “Brother Dawn”, “Brother Day”, and “Brother Dusk.” (Played at various ages by: Lee Pace, Terrence Mann, Cassion Bilton, and Cooper Carter) … overseen by their robot governess, Demerzel (Laura Birn) who has been with “the family” since day one, and helped Cleon I oversee the construction of the Star Bridge, a space elevator and the planet Trantor’s greatest achievement.

Also on Trantor is professor of mathematics Hari Seldon (Jared Harris) and his understudy Raych Foss (Alfred Enoch). Seldon has developed a mathematical model called “psycho history” that can reliably predict the fall of the great empire. Of course, such a theory is not useful for those in power, so Seldon seeks help in proving it, by searching for anyone who can solve a mathematical mystery proof, the “Abraxas Conjecture.”

The answer is provided by Gaal Dornick (Lou Llobell) a young girl from the planet Synnax, which has forsaken knowledge learning in favor of superstition and religion, making Gaal a pariah. She leaves Synnax and meets Seldon on Trantor, and the fun begins.

At this point I don’t want to throw spoilers out there. So the rest of the plot I’m going to summarize like this: Seldon and Dornick are exiled to a planet on the edge of known space, thoughtfully called Terminus, to finish their research. Many things happen(!) along the way, but the mission reaches Terminus, and finds a strange object they label “The Vault”.. that emits a “null field” which prevents any life form from getting too close to it. All except for the Warden, Salvor Hardin (Leah Harvey) who can walk right up to it without any ill effects. Events and regimes from the past arrive on Terminus, and that basically puts us up through episode five.

Yes I know I left some things out, but you know, no spoilers.

Like I said, I’ve not read Asimov’s Foundation series. I like to think however that some of the lines spoken by the characters are pulled verbatim from the books. (Is it true? Tell me in the comments.) They are at the same time overly complex and flowery, with obscure words and structure. This has the effect of making them appear simultaneously stilted and over dramatic, while remaining “smart” if you will. If you have a great vocabulary and have read stuff like Lovecraft and Shakespeare, meaning you can make sense of some of the archaic prose used…. You’ll likely enjoy the lines and performances even more, like me. If you’re not? I can’t say for sure but it might come across as condescending and “over your head” unfortunately. There’s a point when it stops being “smart” and just starts to sound stupid instead. We’re not there yet. I hope it doesn’t get there, either.

Honestly I have been immensely impressed with almost every performance so far. Even young Cooper Carter as the child Brother Dawn. Jared Harris and Lou Llobell in particular are the shining stars here, and you’ll start to love Leah Harvey and her character more and more. They’ve managed to suitably *become* their characters, which is a rare gift these days.

Likewise Terrence Mann I think will be overlooked and underrated in his role as Cleon I and “Brother Dusk,” portraying the voice of experience, wisdom, and compassion. Lee Pace as usual does a superb job portraying smug arrogance, its like he was written for these parts (The Hobbit, Guardians of the Galaxy, Halt and Catch Fire, etc. etc.) I don’t remember him in any roles that *weren’t* like this anyway. Honestly I can’t bring to mind any actor or performance that made me cringe or laugh inappropriately.

If there is one thing that shines above all else though, its the production. Yes of course most of it is CGI, green screens, and the like. It is 2021 after all. However they’ve managed to make it all perfectly seamless. I don’t think at any time I was jarred by going from an “effects scene” to not. Pretty sure there isn’t a frame that *isn’t* an effects scene of some type.

They put you into a world that is at the same time grandiose, wonderful and alien, yet familiar, relatable, and recognizable. From the straw huts on Synnax, to the Space Bridge on Trantor and all points in between. At no point is the production a distraction from the story, which is important of course.

Also present is a decent, but mostly forgettable, soundtrack. I’m trying to bring to mind any “themes” or any of it at all, and I’m drawing a blank. I know its all very well done classical orchestral “space opera” fare, and really never outshines what’s on the screen, rather complementing it with great success.

Would I recommend Apple TV+’s Foundation? Absolutely. I’m not going to rate this properly until its all said and done, but so far I’m looking at a 4+ rating for sure. If you love “smart” “hard” scifi, that has been lovingly crafted into what I hope will be a scifi masterpiece that lives on for a long time, then yeah, make the time to watch Foundation. Be sure to pay attention, though, as some of the jumping around in time can get confusing if you miss where they point it out.

If, like I said above, you’ve read the books and find this series to be a wretched abomination in any aspect, please comment below. I’m interested in how it differs and fails, and what it does right.