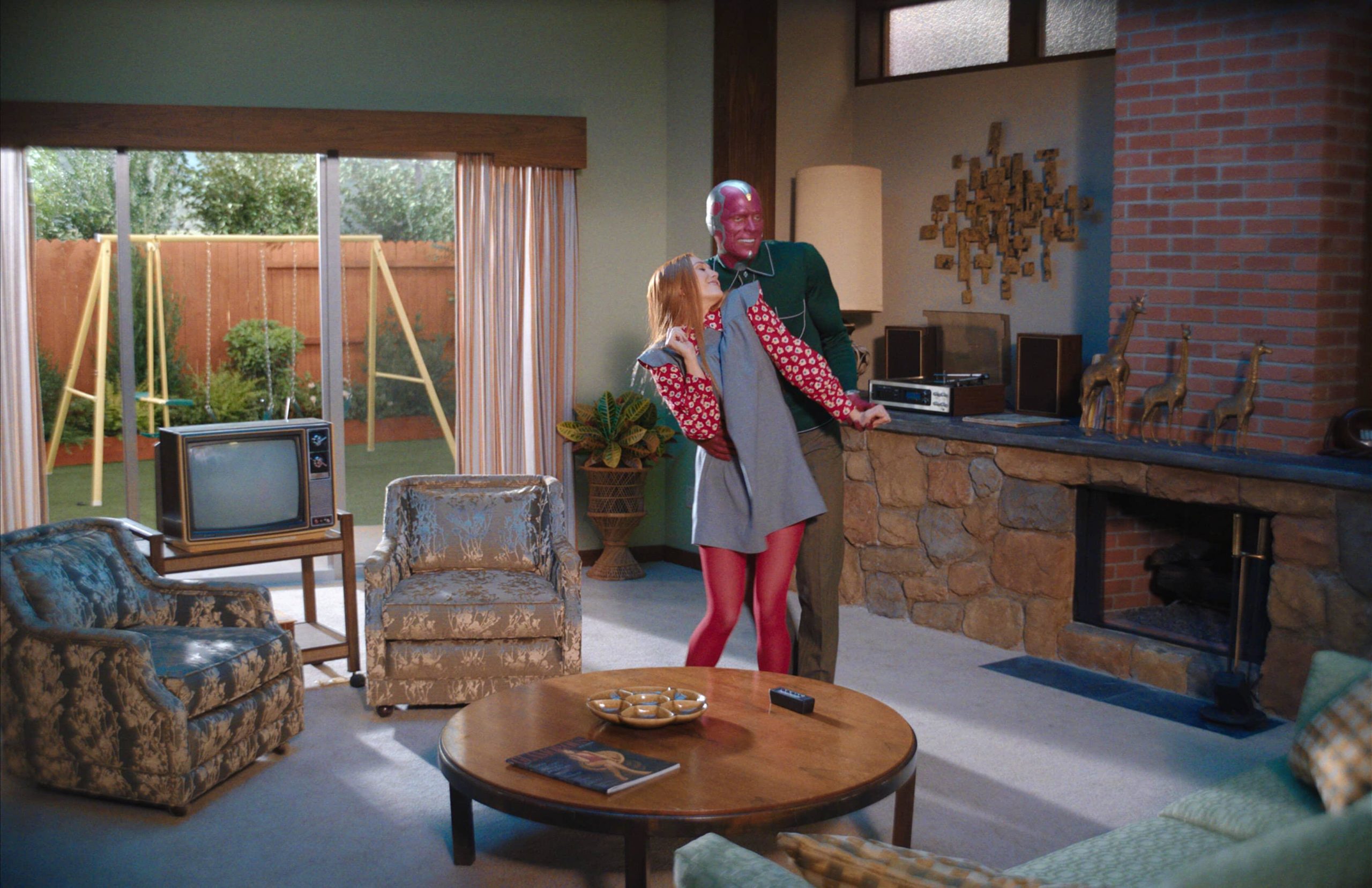 Awwwwwwwwww yeah, man. Episode 3 “Now in Color” of Marvel and Disney+’s Wandavision landed today, and YIKES. What is going on, man? and yeah, ima spoil this for you, so if you care about such things, look away now.

So in the third installment, we find Wanda and Vision in a fair attempt at recreating the Brady Bunch house. It’s not as much of a copy of the “real thing” as the previous two episodes, but the iconic staircase, and general layout and decor of the living room gives it away. right down to the stone planter. Even the episode intro bears the unmistakable mark of The Bunch, except instead of squares, the hexagons rear their six (six six? hmm) sided heads again.

We also find a much more inflated Wanda getting once-overed by the local doctor. We also find that her pregnancy is progressing at an alarming rate, and by Visions calculations she is due in just a few days.

Much hilarity ensues as the two discuss becoming parents, the details of the pregnancy, the usual sitcom tropes about breathing come into it… You know, life in a half-hour sitcom, right?

Geraldine drops by for a chat with the swollen Wanda, who tries to hide her condition, but eventually the secret is out, as Wanda’s labor pains start to warp reality around them. Geraldine assists in the delivery of the baby, but much to Vision’s surprise (and Wanda’s) there’s another! Twins!

The good doctor from earlier in the episode finds himself unable to leave for his Bermuda vacation, but isn’t surprised at all that its “so hard to escape.”

But its becoming clearer that things are not what they seem in Westview. His neighbor, Herb, (earlier in the episode) was out trimming the hedges, and “glitches” into carving through the concrete retaining wall with his electric hedge trimmer. Here we find he and Agnes talking, obviously about Vision and in a manner they don’t want him to hear. Basically something about “Geraldine.” Seems she is the one that everyone finds out of place, and none of them even know where she lives. Herb knows why she’s here, but Agnes stops him from spilling it.

“I was a twin,” Wanda says as she reminisces about her brother, Pietro, Geraldine turns somber and says, “He was killed by Ultron, wasn’t he?” Wanda notices her pendant, which has the same “Sword” design as the helicopter toy she found last week.

And things turn decidely darker. Geraldine can’t explain, and is pointedly asked to leave. Which she does…

…and finds herself in the middle of a field at night, outside the real Westview, surrounded by helicopters and SUV’s at a large and rather SHIELD looking encampment. It’s obvious we are back “in the real world” and she’s passed through some sort of barrier that these people are all trying to keep at bay or something. That part isn’t made clear.

Again, they’ve given us just enough to make us scream at the TV set, “NOOOOO MORE MORE MORE!!!” I mean, seriously guys, I haven’t felt baited like this since LOST and that’s been a long long time. I miss it, to be honest.

The “ad” spot for this episode is another product bearing the mark of Hydra, a moisturizer named “Hydra Boost.” Still wondering what role Hydra will wind up playing in this when its said and done.