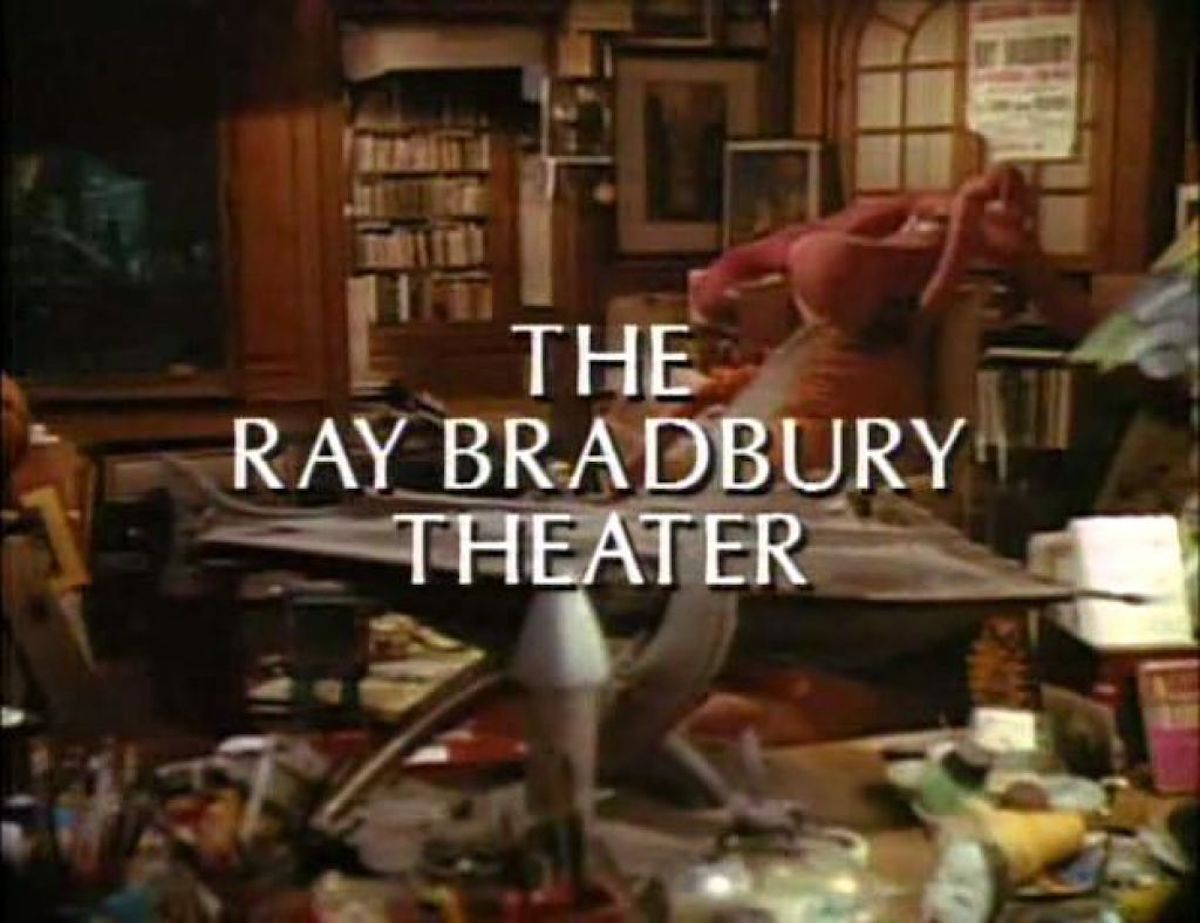 So the other day I’m just chilling and flipping through TV listings, specifically on the Comet Channel, which if you’re a fan of science fiction you know all about by now… …and a listing for “The Ray Bradbury Theater” pops up. I’m like “HOLY SHIT THE RAY BRADBURY THEATER!!””

I had totally completely forgot this show even existed, and it was like a flood gate of things came back into my head. Memories of setting up the archaic VCR and cable box to record the show on USA’s late night offering…

..and of the intro. My god the intro. This was always one of my most favorite show intros ever. Mr. Bradbury making his way to his study, through an antique elevator which I’ve always thought was a homage to the homage of the antique elevators in the Bradbury Hotel in the movie Blade Runner. Then he sits down in front of his typewriter and takes a good look around at his collection of knick knacks and trinkets, from his Mars globe, to any number of random objects he has floating around.

Each episode of The Ray Bradbury Theater was written by the man himself. Either specifically for the show, or co-opted from existing short stories. If you’re not familiar with the name, just go have a gander at titles like The Martian Chronicles, Something Wicked This Way Comes, and most notably, Fahrenheit 451.

The early shows which aired on HBO for the first two seasons, are a particularly dark glimpse into human nature and our psyche. The second episode of season one, “The Playground” is a prime example of this, where William Shatner’s character relives his childhood bullying on the playground, and at the end he switches places with his son, him into his body and he into the kid’s…

…and his kid literally just WALKS AWAY as the adult trapped in the child’s body endures a particularly horrific playground beatdown… just HOLY FUCK that was dark.

Unfortunately after USA picked it up, the quality of things started to go, and the stories became less dark and more “Twilight Zone” like, with their twist ending and healthy dollups of irony. Sometimes, as in Season four’s “The Day It Rained Forever” the point seems to get completely lost altogether. Honestly I still don’t know what the point of that was.

Then there’s the star power that signed on to be in this show. The HBO seasons especially are just like, wow, how did they do it? Names like Leslie Nielsen, Jeff Goldblum, Drew Barrymore, Peter O’Toole, James Whitmore, and so many more.

Luckily, you don’t have to try and set your virtual VCR to record episodes of this, as they are all up on YouTube here:

I would love to give the show a higher rating, but I’m going with a 3.3 out of 5. The later episodes are just so hit and miss with the “point” while others are just so brilliant. The production quality is also just really not all that. I mean, its not bad, but they could have done a lot better. I fear these were recorded straight to video like so much was done back then, and hopes of a decent remastered DVD or even Blu Ray are probably a pipe dream.

If you’re a scifi junkie like me, you need to check this show out. All 6 seasons and 65 episodes, duds and all.